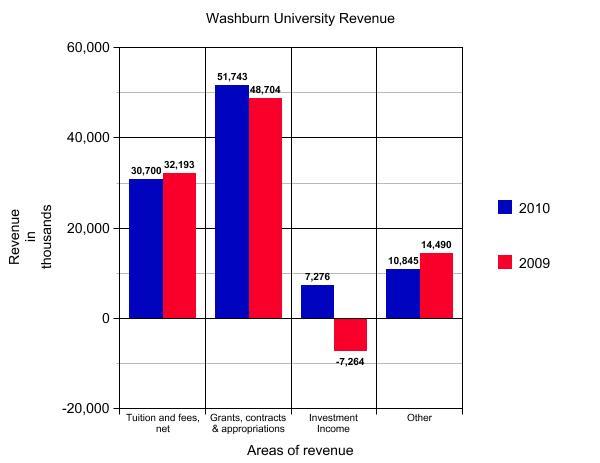 Last Monday, members of the Washburn Board of Regents met to discuss the 2010 audit, and it was just plain dull. Nothing could have been more usual—which pleased everyone involved.

Representatives of RubinBrown, the auditing company, said that there was nothing out of place or surprising about the audit.

Between 2009 and 2010, the university’s revenues increased from about $88 million to $100.5 million. Oddly, although tuition and enrollment both increased over the year, the university reported $32 million in tuition from 2009 and only $30.7 million in 2010. Jerry Farley, president of Washburn University, said that this is accounted for because Pell Grants cannot be reported in the same section as tuition, and the number of grants increased significantly from year to year. The total expenses in 2009 were $95.5 million, and decreased in 2010 to about $94 million.

This is the first audit that this particular company has performed, said Farley. The university policy dictates that a different company perform the audit every four years, to make certain that new eyes are checking over the accounts.

“Washburn has a long history of having very strong financial controls,” said Farley. “We’re a very fiscally conservative organization so it did not surprise me at all that we had a good outcome from the audit.”

The auditors noted certain aspects of Washburn’s financial system that they encountered over the period of the audit. They praised the staff for its experience and dedication, and noted the benefits of Washburn’s improved enrollment and collection tactics.

Chris Leach, the director of finance, explained how tactics for collecting outstanding debts to the university have improved.

“We engaged two outside collection agencies,” he said. “Once we got those external people involved, we saw those past debts stack up.”

Also, a new program allows the university to interfere with state refund checks or garnish wages. Of course, academic institutions in general always have the ability to put a hold on a transcript, and even declaring bankruptcy doesn’t cancel a student’s debt.

“Over Christmas, we collected an outstanding debt from 1982 because a student needed a transcript,” said Leach.

RubinBrown also made some suggestions of things that could be improved to be what Lilly called “best practice-type stuff.”

Among these were that with the current system, the passwords for accessing sensitive financial information should have better alphanumeric standards and be changed more regularly than what they currently are. Also, many offices do not follow one standard system for record keeping.

Overall, the audit was clean, and the RubinBrown representatives only had a few recommendations for changes to Washburn’s financial process.

“[Changes] that have not already been implemented or put into place, we plan to address over the coming months,” said Leach.