Lady Blues roll into second half 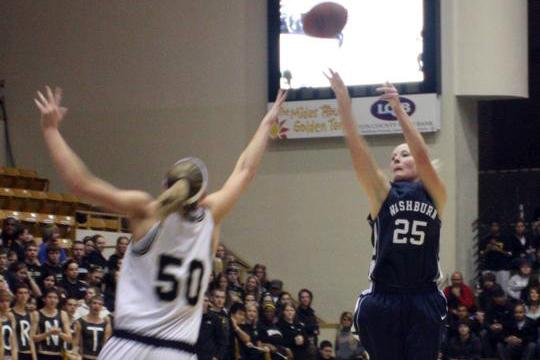 Sharp shooter Washburn basketball player Stevi Schultz takes a shot from behind the arc against Emporia State. Schultz has played a key role in the Lady Blues success this season. Photo by Rob Burkett, Washburn Review

The pressure that comes with playing collegiate sports may not be for the faint of heart but the Washburn Lady Blues basketball team has so far been conquering the court this season. Many new faces make up the team this year, and they have won all but one game during the first half of regular season.

“The goal we started this season with is, still is to win championships,” said Ron McHenry, head coach. “I’m not sure I’m a huge goal-setter. I know we want to get better every day. We want to win a lot of games.”

The Lady Blues carry a 13-1 record into tonight’s MIAA conference match against Lincoln University, the newest member of the conference. Tonight marks the halfway point in the Lady Blues season, a season where they have exceeded expectations.

With the Lady Blues continuing to win games, taking home a championship seems like a feasible possibility. Losing all five starters from last season hasn’t slowed down the team. The Lady Blues have also overcome many injuries to key players. The most notable, Sierra Moeller.

“We lost Sierra,” said McHenry. “That’s been a month or so ago, and that affected us for a while. The good thing about it is that it happened early, so we were able to adjust to it, but taking her out of our game, out of our system hurt our toughness. Just a rebounding, tough, scoring type kid.”

As with any physical competition, injuries are inevitable, but the team is constantly working to triumph over adversity. Throughout the first half of the season the Lady Blues have proven their durability and their ability to finish out games by winning many close games.

“It hurts you, but it also gives other kids a chance to play and shine,” said McHenry. “In one sense, you lose something. In one sense, you gain something. You find out a little more about the players you got in your program that may not have played as much.”

Just as with the hydra of ancient Greek mythology, when one head is severed from the team, a new one will take its place. McHenry said he is proud of the season the Blues have put together and proud of his team.

“You’re never completely satisfied as a coach, because you’re always looking for somewhat negative things so you can cure them,” said McHenry. “I think we have played well for the most part. We’ve had one bad game. They’ve come together as a group and are a team that wants to play for each other. That’s always fun to coach.”