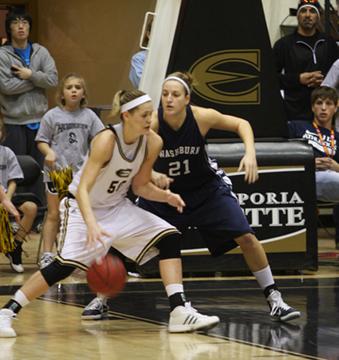 Alli Volkens, left and Cassie Lombardino battle in the post during Saturday's edition of the Turnpike Tussle. Lombardino led Washburn to the win 66-62

EMPORIA, KAN.– For true fans of women’s basketball, there was a little bit of everything to be seen in a hard fought game Saturday afternoon between Washburn and Emporia State.

Washburn came into White Auditorium ranked No. 7 in the country looking to take on their first real test of the season against the No. 10 ranked Lady Hornets. It was a hard fought affair but Washburn showed their resolve and passed with flying colors.

In the first half, Emporia State, fed by the intensity of a vocal home crowd, came out strong, taking a 6-2 lead early in the game. The Lady Blues responded.

Due to early foul trouble, Cassie Lombardino, junior center went to the bench early in the first half. Washburn then turned to the backcourt duo of Laura Kinderknecht, sophomore guard and Megan Lassley, junior guard who led the way in the first half with 9 and 7 points respectively. Stevi Schultz, junior guard also contributed 6 points in the first half, hitting key three point shots to keep the Lady Blues within reach.

ESU rode the momentum of the home crowd to a 36-32 halftime lead capped off with a half court three point shot to end the half for the Lady Hornets.

“It was tough sitting watching in the first half,” said Lombardino. “I was ready to take it at them.”

Working in the post, Lombardino and Alli Volkens, Emporia State forward went head-to-head throughout the second half trading baskets, crashing the boards and doing whatever they could to help their respective teams to the win. Early foul trouble in the second half kept Volkens on the bench for part of the second half though and Lombardino took advantage of her absence.

In the end, Washburn managed just enough lucky bounces in their favor as the score was tied three times in the last nine minutes of the game. Timely shooting from Schultz combined with Lombardino pounding the defense inside were to much for the Lady Hornets to overcome as the Lady Blues took the first meeting of the season between the two 66-62.

“It was a tough win,” said Mchenry, “We had some early foul trouble but our bench really stepped up. It was a gritty effort.”