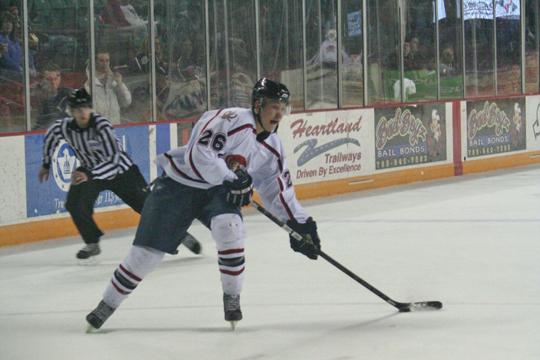 Topeka's Brian Christie fires one of his three shots on goal Friday night. Christie had an assist in Topeka's dominant 3-1 victory.

Friday night’s matchup for the Topeka RoadRunners certainly saw the Wichita Falls Wildcats attempt to prowl their way to a victory.

Fortunately, the RoadRunners’ defense and goaltending was the top dog for a majority of the game, as Topeka (27-8-2) defeated Wichita Falls (17-17-4) 3-1 at Landon Arena.

Only allowing 26 shots in the contest was in part aided by players willing to sacrifice their bodies to block shots, but according to Topeka head coach Scott Langer, Wichita Falls overall didn’t develop many opportunities.

“Defensively, we were pretty good,” said Langer. “I know we gave up a few where (Tirronen) had to bail us out, but (the Wildcats) were just kind of hanging out in the neutral zone, not working too hard, and they got some opportunities off of it. I’m proud of my guys; we didn’t give up a whole lot.”

A night after Topeka lost a 3-1 lead late in regulation before winning eventually in a shootout, RoadRunner goalie Rasmus Tirronen stonewalled several breakaways Saturday night. Tirronen, who understood his team’s effort on the night, wanted to make sure Topeka kept the lead.

“(The defense) is helping me a lot this season,” said Tirronen. “Our defensive core is probably the best in the league. It feels good to return the favor every now and then.”

After a scoreless first period, Wichita Falls grabbed the lead at 6:28 of the second period when a broken play led to the puck on Dakota Kletcha’s stick, as he fired it past Tirronen. But Davey Middleton was able to redirect a Jacob Poe shot by Tyler Green at the 16:22 mark of the period to make it a 1-1 game going into second intermission.

“He was a player we recruited all of last year,” said Langer. “He’s just a smart hockey player. He knows where to be. I think he was a little underutilized there (Tri-City) for what he can do. It’s a weight off his shoulders because he’s getting to play a bigger role and he’s thriving on that.”

In the third period, Justin Hussar fired a turnaround wrist shot past Green at the 1:49 mark to give Topeka the advantage.  Joe Van Antwerp, who scored the game winning goal in the shootout Thursday, picked up a goal at the 15:10 mark on the powerplay to essentially make the game unreachable for the Wildcats, who did not have too many chances outside of their two breakaways.

Following the game, Kletcha and Topeka’s Andrew White got locked in a physical altercation at center that led to tensions between other players. Langer attributed this to an alleged spearing by Kletcha, which he found to be quite disappointing from a coach’s standpoint.

“The runs from behind, the punches to the face and the spear after the game, it’s classless,” said Langer. “It’s probably not good for our league.”

Topeka will now enter a battle with the Springfield Jr. Blues next weekend riding an eight-game winning streak and sitting first in their division. The RoadRunners will take the ice Saturday supporting their Kansas Day jerseys  and will also play Sunday. Faceoff is at 7:05 p.m. on Saturday and 5:05 p.m. Sunday.