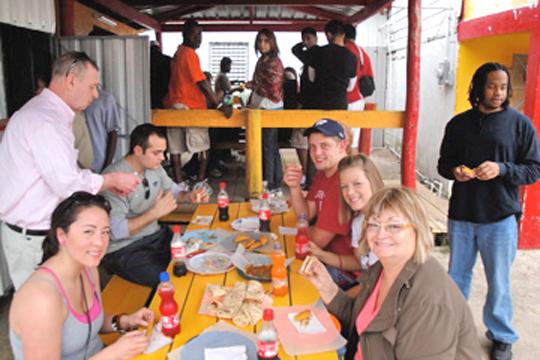 Dr. Judith McConnell-Farmer, front right, enjoys a meal with her students. The meal was slowly prepared and students had to adjust to a slower lifestyle.

It may have only been a brief period of time spent abroad for 11 Washburn students this past winter break, but that brief period did a lot to affect each and every one of them.

The students, accompanied by Professor Judith McConnell-Farmer of the Washburn education department, traveled to Belize City, Belize from Dec. 28 through Jan. 5. While there, the group visited Dorothy Menzies Child Care Center, a public orphanage in Belize City, as well as Liberty Children’s Home, a private orphanage in nearby Ladyville.

During the trip, they also had the opportunity to see some of the country’s culture, going to the Mayan ruins, as well seeing the museum in Old Belize, going to San Pedro Island, and attending the Belize International Symposium on Education.

Students were first exposed to the opportunity through fliers around campus and also received e-mails which described the trip and all of its components. Students who took the trip were required to take a course over the fall semester, which usually met once a week on Sundays and helped students acquire expertise for what they would see and experience in Belize.

A trip to the first orphanage caught some of the members off guard with the conditions of the facility. According to Katelyn Tebben, sophomore, it was hard to not want to do something more than just help the children temporarily.

“It was hard to see what we did,” said Tebben. “If I was at a different time in my life, I would’ve come back with four kids. The first orphanage was funded from the government and a lot of the kids, they didn’t have shoes, and if they did, they didn’t fit.”

While at the Liberty Children’s Home, the group helped not only tutor and play with the children, but also spent time cleaning windows, floors, and the overall structure of the orphanages. This past year, Hurricane Richard had damaged much of Belize and the damage was still visible.

Lon Talbert, junior, said that this was very helpful for the teachers there, especially because the children were on break during the time spent there.

“The children weren’t in session; they were on holiday, so we cleaned their classroom and building,” said Talbert. “The teachers were ever so grateful so that’s less they have to do, so when the children come back, they’ll see how brand new everything looks. We had to clean their carpets with brooms and I broke a broom trying to clean the carpets. It all looked so much better in the end.”

For David Auldridge, senior, going on the trip helped him see how different teaching requirements are between Belize and the United States.

“It was interesting to see what’s required of us as students here in the U.S. to obtain our degree and obtain our licensing to work with children, compared to how Belize’s is,” said Auldridge. “About ten percent of their teachers on the preschool level have an associate’s or bachelor’s degree whereas here in the U.S., that number is probably 95 percent.”

Auldridge went on to talk about how at the symposium, he and his classmates met several individuals who are working with the ministry of education to create a five-year plan to change the number of teachers with degrees. According to Auldridge, the individuals have recognized that the country’s growth starts at the bottom and that educating the children at a young age is what leads to a better future for countries.

However, due to the course taught to the students, Talbert knew his class was going to be ready for the culture of Belize based off the intimacy he says the group developed. But, one of the most exciting moments was the acceptance they received from an individual who was giving them a tour of the Mayan temples.

“We seemed to know everything and when people were talking, we were very able to have great input,” said Talbert. “Our tour guide at the Mayan ruins actually called us and said most people who come here (Belize) are called ‘Carnies’ from the Carnival Cruise Ships, but our tour guide said we were most like family. She called us Belizean.”

A few setbacks did occur along the trip. Tebben ran into miscommunication with making sure she and a roommate arrived with their classmates at one of the destinations. Auldridge and Talbert also mentioned there were individuals along the streets that solicited for money and it was unclear whether they actually needed the money.

However, when seeing the solicitors, it was hard to not see why Belizeans would spend time trying to get money from non-natives to the country, according to Talbert.

“I gave to some of the people that asked us,” said Talbert. “Sometimes I think the people are homeless and they don’t have anything, and they know as tourists and visitors of their country, we’re willing to help someone less fortunate than us. They could do that all day and be millionaires. We don’t know. But at least they’re trying to succeed in a little more positive way than taking out a weapon. Instead, they’re asking and receiving.”

This was the first trip taken to Belize by Washburn, and there was speculation about how well the Belizean orphanages would embrace the students, but Tebben, Auldridge, and Talbert all agree that the trip was a success. Each has a history in their family of helping others, with Tebben and Auldridge both having parents who were teachers and Talbert’s mother practicing social work.

All three agree that the trip enhanced their understanding of why they are involved in education. Each student will now design a presentation to summarize their learning experiences.

“I’m becoming a teacher because it feels to me like it’s my calling,” said Tebben. “I feel like I’m supposed to be doing it. I don’t think I’d feel right doing anything else. Your career isn’t supposed to feel like work. It’s supposed to be something you love to do.”