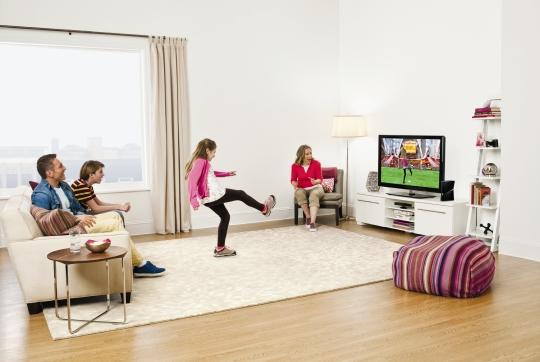 When Microsoft unveiled its new Kinect technology last November, it was difficult to speculate how U.S. consumers would receive the new piece of technology.

Naturally, after Kinect was introduced to the world under the code name “Project Natal” at E3 2010, curiosity led many to want to try out the revolutionary new technology that allowed hands-free play on the Xbox 360. The E3 trailer (above) showed a technology basically without limits, able to recognize vocal commands, follow the user’s body movements, employ facial recognition to allow users to sign in, scan items such as skateboard decks into the game to be played with and offer an entirely new social experience to Xbox gamers. By Jan. 6, 2011, eight million units were already sold, with one million sold within a month of the North American launch.

However, after its launch, the initial Kinect set-up was somewhat underwhelming. The Kinect’s ability to accurately display body movements is, at this point, somewhat primitive compared to what has been advertised. Scanning objects into the game is not currently an option, the array of Kinect-compatible games is very limited and users are still unable to use Kinect with many of the basic Xbox Live applications such as Facebook, Twitter and Netflix, as advertised. Another disappointment is that the system is unable to be turned off by vocal commands, as is advertised in the trailer, although the vocal technology is still quite outstanding and very accurate. Lighting and body position still pose some issues for facial recognition as well as body movement.

Despite these shortfalls, it is important to remember that this technology has only been available for two months, and many upgrades are still to come that will not only drastically improve the Kinect’s ability to read body movements, but will also offer a variety of new applications and uses for the device. Another highlight is the Kinect’s video chat, which follows the user around the room and allows gamers to communicate via video, similar to Skype.

Of the few games currently available for Kinect, the majority are fitness/sports games. “Your Shape: Fitness Involved,” “The Biggest Loser: Ultimate Workout,” “Zumba Fitness” and “EA Sports Active 2” make up the fitness games, and they are fairly legitimate. “EA Sports Active 2,” which comes with a heartrate monitor, is fairly impressive in its ability to help users burn calories, set goals and keep track of their exercises, although “Your Shape: Fitness Involved,” utilizes the most out of the technology by actually scanning your body and making a copy of you in the game.

A few interesting non-exercise games have been announced for the Kinect, including “Forza Motorsport 4,” “Kinect Star Wars” and “Michael Jackson: The Experience.” However, the major game series such as “Madden,” “Grand Theft Auto” and “Call of Duty” have yet to announce any games that utilize Kinect technology.

While the launch’s flaws certainly haven’t inspired a ton of confidence in the technology, it certainly has a lot more potential than either the Wii or Playstation Move motion controller to completely turn the gaming industry upside down. Despite being less than advertised, the Kinect is already a fascinating piece of technology and is capable of doing things that were almost inconceivable 10 or 20 years ago. The technology breakthroughs that Microsoft has come up with while creating this technology will not only benefit gamers, but will also have benefits for Windows users. It may even be used by an array of professionals, including the military, medical, business and scientific fields. It may not be capable of a whole lot right now, but it is certainly entertaining enough to tide consumers over until the updates are released. It’s certainly worth paying $150 for.