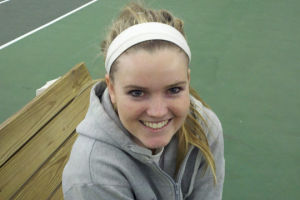 For nearly 10 years, Elektra Hunter has been playing tennis alongside her family in her homeland of Noosa, Queensland, Australia.

This past fall, she made the voyage to Washburn University for her freshman year to play tennis without ever having traveled to the United States before. The decision seems to be having a positive impact thus far with the ‘Elektra-cutioner’ recently helping to defeat No. 19-ranked Drury University.

Hunter quickly learned American idioms, adapting to sweaters instead of jumpers and ketchup as opposed to tomato sauce. The biggest difference facing the young Australian was the weather. Noosa has a subtropical climate that reaches between 55 to 68 degrees Fahrenheit in the winter.

“So coming here, I thought I had ‘winter clothes,’ but soon realized why everyone told me I needed more,” said Hunter. “This was the first time I saw snow, slipped on ice and felt like I nearly was going to freeze to death.”

Hunter has since been introduced to American food and currency.

“All the pennies, dimes and quarters got me confused,” said Hunter.  “Plus all your money is the same color.”

The decision to move half a world away from everyone she knows was difficult, but Hunter is pleased with her selection and looks forward to more tennis. Her goal was to continue her tennis career after she graduated from high school, so she began looking at different schools and talking to numerous coaches.

“I wanted to keep playing tennis after I finished high school,” said Hunter.  “I had been speaking to a few coaches and Coach Dave [Alden] seemed really nice, and the program sounded really good, so I decided to give it a go.”

While Hunter enjoys playing tennis at the collegiate level, she also has big plans after she graduates from Washburn. She is working toward a business degree with hopes of focusing on marketing and at some point working for a university.

“I want to do business and marketing,” said Hunter.  “Then maybe do marketing for colleges and stuff like that.”

While tennis is almost equally as popular in America and Australia, many differences arise in the culture of other sports within the two countries.

“It’s a surf culture where I live,” said Hunter.  “Surfing is a class, so you go surfing all the time.  You don’t go to football.  Over here, football’s a really big deal.  Back home, it’s like you go do surfing, you can go do cricket, and you do [Australian rules] football.”

Like many girls her age, Hunter enjoys swimming and shopping.  Hunter also enjoys the many national parks and reserves in her area, saying that seeing a kangaroo or koala would be akin to a deer sighting in Kansas.

Hunter plans to make the most of her time in America and is concentrating on perfecting and having a more consistent tennis game.

“I want to get a lot of tennis matches and get better, get more consistent,” said Hunter. “I’ve made a lot of friends through tennis. It’s just been really good.”

Alden, Washburn head coach, says he has a great respect for Hunter taking the leap to study and play in America. He said that it can be difficult being away from home when you are just a short car trip away, but she is more than 20 hours away from her home in Australia.

“She just turned 18 in October,” said Alden. To put yourself out there like that with no support system, that speaks a lot about her character. She’s really fits in nicely now with the girls. They’re her support system, and she’s started playing a lot closer to her potential. She’s made nice gains.”