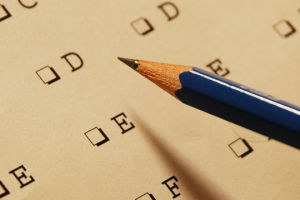 On Feb. 14, prospective Washburn law students tackled the Law School Admissions Test, notorious for its stress. The test is offered four times a year, and is required for acceptance to the Washburn University School of Law.

In the meantime, for students who didn’t sacrifice their Valentine’s Day to the LSAT, the next several months will be filled with valuable study time for those taking the June LSAT.

In fact, this grueling test requires several weeks of consistent preparation from any future law school applicant who expects to achieve a decent score. Students must decide for themselves which study method works best for them.

“There are different kinds of options,” said Karla Whitaker, director of admissions at Washburn Law. “Some people take a six-week course, which includes classroom time talking about strategies for pertinent questions, and then is followed up by a number of actual practice exams under time circumstances.”

Whitaker also said that students who feel more confident in their own study methods could easily find similar study materials at their local bookstore, which would include plenty of helpful study information, and practice exams.

There are also many who take online courses. Regardless of the method, the half day long LSAT is not to be underestimated.

“It’s five parts multiple choice, and one of those sections isn’t scored, and it’s used to test future questions,” said Whitaker. “After you finish the five multiple choice sections there’s a writing portion that’s given at the end of the test, and that is not scored. A copy of the writing sample from that test is included with each student’s LSAT report that goes to the law school.”

The LSAT score is not the only determining factor in whether or not an applicant will be accepted.  Their undergraduate GPA will also play a role among other considerations. However, the test results of the previous year could prove useful in determining the likelihood of acceptance.

“The median LSAT for Washburn last year was 155, so that means that was the middle point of our entering class,” said Whitaker. “Generally, if an applicant scores at or above the last years median, that’s an indicator of a pretty good chance of admission.”

Law students who have successfully conquered the LSAT have given testimony to the importance of heavy preparation.

Although it can be difficult for students who are in the process of finishing their undergraduate degree to find the preparation time required for the LSAT, they must strike a balance between their schoolwork and preparation for the big test.

“You really need to make a difficult decision between focusing on your studies and focusing on LSAT,” said Samuel Foreman, student at Washburn Law. “If you can do both that’s great, but putting in the extra work can really make a huge difference.”

Having taken the test twice, Foreman said his first score would likely have gotten him in to Washburn Law with a small scholarship. However, his second score was higher.

With his second score he was accepted into Washburn Law with a full academic scholarship, and will graduate in May.

“The amount of time that you put in really makes a huge difference, and you really have to study hard,” said Foreman.

For those unable to take this month’s test, the next LSAT will not be administered until June. Those interested in taking that LSAT need to register before the deadline on May 3.