End of the beginning for punk 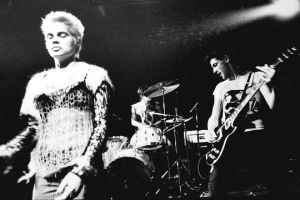 On, Jan. 14, 1978, the Sex Pistols performed at the Winterland Ballroom in San Francisco, Calif. on the final date of their U.S. tour. At the end of the show, singer Johnny Rotten screamed, “Ever get the feeling you’ve been cheated?”  and angrily walked off stage. Rotten promptly left the band and bassist Sid Vicious soon died of a drug overdose, signaling the end of the first, nihilistic, era of punk rock.

A largely unknown band, The Avengers, opened the show that night and “Live at Winterland 1978” captures the intensity of that fateful day.

Although the recording leaves a bit to be desired in the quality department, by the end of the album, the listener should be as exhausted and sweaty as the band was.

I’ve always held this period in music, and these events in particular, dear to my heart because it happened exactly one month after my birth. It took everything that popular ‘60s music spoke of: peace, love, etc. And spit on it. There was frustration in the air, and the children of the ‘60s were finding a voice of their own.

Even though the band lasted less than two years, The Avengers left an important mark on punk rock music. Opening the show with their most famous song “The Amerikan In Me,” which has been covered by Pearl Jam, among other bands, singer Penelope Houston is all business. All of the frustration, anger, piss and vinegar of early punk is there, and Houston is not in a happy mood. She spits out lyrics such as, “Like lemmings you run towards destruction, you can’t see the stream of corruption, oh I see you’ve been blind, you better make up your mind,” with a passion that could only be found at the tail end of punk.

The dirty, messy, cover of the Rolling Stones’s “Paint It Black” early in the set speaks of a changing of the guard for music. While Houston screams, the rest of the band thrashes about, not caring for one moment whether they were even playing the song right. This was not about performance; it was pure, raw emotion that drove Houston to scream “I see a red door and I want it painted black.”

Speaking of teenage angst years before Kurt Cobain ever picked up a guitar, “We Are The One,” could’ve been the anthem for a generation; if that generation had cared enough to unite behind an anthem. What the band lacks in skill, it makes up for in on-stage intensity. There is both anger and exaltation in lyrics like, “we will build a better tomorrow, the youth of today will be the tool, American children built for survival, fate is our destiny and we shall rule.”

By the time the set closes with  “Car Crash,” the listener begins to understand what is about to take place later that night on the same stage.

“Live at Winterland 1978” is available on both iTunes and Amazon Mp3. More information about the band, along with several other releases, are available at www.penelope.net.