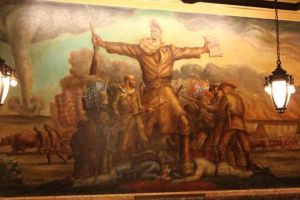 In June 1937, John Steuart Curry began painting murals inside the Kansas state capitol. Criticism soon followed. Today, they are considered historical monuments, which Curry proclaimed himself decades ago, although many at the time did not agree.

One of the most famous of his paintings is “The Prelude,” which features John Brown during the anti-slave movement in the Kansas Territory. The art depicts a tornado in the background, symbolizing Kansas, with a group of men huddled who appear to be fighting, holding the United States flag on one side and the Confederate flag on the other. John Brown is holding a rifle in the one hand and a Bible in the other, while yelling and standing on fallen soldiers.  The mural brings the story of Brown to life in the painting.  Curry’s critics were not supportive of his use of color and the harsh story it told, calling it menacing.

To answer his critics, Curry tried to paint another mural that was softer and not as ominous, “Kansas Pastoral” resulted.  This painting shows a bull grazing in an open field, surrounded by farmlands, a farmhouse and a rising storm in the sky. The critics found fault with this mural as well, criticizing his use of the color red for the bull, and the overall appearance of it. Curry did not finish all eight panels he originally planned on painting because of these complications as well as others. He didn’t want to complete them because the legislature criticized him so he didn’t even sign or complete the paintings he was responsible for.

Lumen Martin Winter was hired to finish the murals, which he did in 1978.

Not only did Curry paint these paintings, but he was also famous for his other paintings of Kansas throughout his career. One is called “Tornado Over Kansas” showing a farmer and his family trying to get the family and animals under shelter while a tornado approaches. This among other paintings, have made Curry a historical Kansas figure and his paintings historical monuments.

Today the murals are still available for anyone to view at the Kansas State Capitol at 10th Avenue and Jackson Street in Topeka.  The capitol is open Monday through Friday from 8 a.m. until 5 p.m. and guided tours are given at 9, 10 and 11 a.m., as well as 1, 2 and 3 p.m. Monday through Friday. Admission is free. For more information call the State Capitol at 785-296-3966.