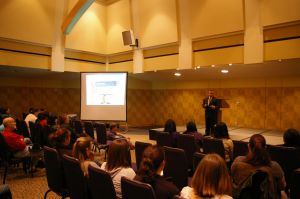 The first American soldier wounded during the Iraq war spoke at Washburn University on Thursday, Feb.17. Retired Marine Staff Sergeant Eric Alva addressed issues related to discrimination, such as the military’s treatment of gays and lesbians.

Alva stood behind President Barack Obama as the “Don’t Ask, Don’t Tell Repeal Act of 2010” was signed into law. The bill marked a reversal in policy that had previously prohibited homosexual individuals from serving openly in the United States armed forces.

During the lecture, Alva recounted his journey to the military and his life as a secretly gay man serving as a marine. Alva was forced to lie about his sexual orientation in order to serve as a Marine.

“It was so stressful, and not just for me but for millions of others,” Alva said at Thursday’s event. “To lie about who you are every day just so you can keep your job and wear the uniform to protect this nation, and even die for it.”

One tactic that Alva used to satisfy the curiosity of his fellow Marines about why he didn’t go on dates with women was to take photos from store-bought picture frames. He would set them in his room and pretend that the photo was of his girlfriend.

Alva recounted the event that resulted in his injuries during his deployment in Iraq.

“I took about three steps and that’s when the explosion went off,” said Alva. “I had triggered a landmine that I had missed the other couple of times I walked around there…There was a lot of smoke. My hearing was gone. If you cover your ears it kinda sounds muffled; that’s what it was like… I was holding my right arm and I could see that my index finger was gone and my whole hand was just caked in blood, and I remember thinking ‘oh my God, I can’t move.’ I was screaming the whole time… I thought I was going to die.”

After retiring from the Marines and recovering from his injuries, Alva served as a counselor to other service members that had been injured in Iraq.

Alva joined the Human Rights Campaign in 2006 and lobbied Washington legislators for lesbian, gay, transgender, bisexual and queer rights. He worked towards repealing the military’s ‘Don’t Ask Don’t Tell policy, among other issues.

“I’m from Indonesia and ‘Don’t Ask, Don’t Tell’ is a topic that really amazed me as an outsider,” said Aljupri. “I did research about DADT and I found Eric Alva, his story and it really amazed me.”

The primary focus of the event was Alva’s experience as a Marine and the difficulty with the Don’t Ask Don’t Tell policy but he related this policy to other forms of discrimination in society. Women and people of different ethnicities still face many obstacles in equal rights, according to Alva.

In addition, with regards to DADT, after the repeal goes into effect, there will still be several benefits that same-sex partners will not receive, such as financial benefits or tragedy assistance.

But Washburn students were still able to focus on all of the positive effects Alva made in his speech when it ceased.

“The event was wonderful,” said T.J. Bross, Washburn student. “I liked how it wasn’t just focused on his experience being gay. It was about people’s differences, like people that are disabled and of different sexual orientations. It hit on a lot of key things, in general, that we don’t focus on enough.”

Despite having the policy officially repealed in late 2010, individuals may still be discharged for being LGBTQ. The certification process has not been completed for the change in policy, which is expected to be completed Summer 2011.