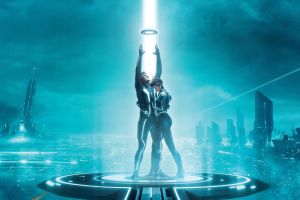 To say I really liked “Tron: Legacy” might be inaccurate, but I will say that I really liked watching “Tron: Legacy.” Normally, this distinction would be pointless; but because I saw it at one of the Warren theaters in Wichita on a massive Imax screen that stayed hidden behind a red velvet curtain until the previews started while I sat in my plushly cushioned seat wearing the nice kind of 3D glasses that do not press too hard against the sides of my head, the difference between the quality of the movie and my enjoyment of it becomes noteworthy.

“Tron: Legacy” is the big budget and long-await—err, almost entirely unexpected sequel to the 1982 cult classic “Tron.” If you missed the original than you are in luck, because the entire movie is posted on YouTube, actually, it is only on YouTube. Disney, in an unusual decision that elicited huge speculation as to the cause, did not do any DVD reprinting of the original prior to the release of “Legacy” in theaters, so unless you want to overpay for a used copy watching it in ten minute blocks is the best you can do.

And yet, despite the deliberate unavailability of its predecessor, “Tron: Legacy” was still more faithful to its namesake after nearly thirty years than some sequels are after only one or two. It would have been easy, really it would have been expected for a movie like this to simply trade in on the concept of the world and the iconic imagery associated with it to tell a completely unrelated story, then just chuck in a couple of cameos from minor characters in the original. Instead, the new film centers largely around characters established in the original.

Jeff Bridges returns as Kevin Flynn as well as Clu, Flynn’s former avatar who, through the wonders of digital effects (and not, as I originally claimed, Bridges just being so good he could literally make his skin act younger) still looks as young as when he was programmed. Bruce Boxleitner also reprises his roles as Alan Bradley and Tron, though admittedly in a much smaller role. Garrett Hedlund plays Sam Flynn, the predictably rebellious heir to a company he refuses to run after the disappearance of his father when he was a child.

As far as character and story line are concerned, “Legacy” can hardly claim an abundance of effort; that is not to say it was lazy, but I doubt anyone strained anything coming up with it. When it comes down to it, a lot of the movie winds up being artfully presented exposition to catch up on what had happened during the thirty years since the original. Still, calling “Tron: Legacy” dull because the plot if fairly predictable from a distance would be like saying a roller coaster would be no fun because you saw the shape the tracks followed while you were waiting in line.

Now I mentioned at the beginning of this article that my viewing experience in this case was not entirely reliable. I cannot say with certainty that “Legacy” would be as amazing to watch in nearby theaters as it was at one of the Warren theaters (though in fairness, the Warrens are some of the nicest in the country), but I can say that it is one of those movies that truly needs to be experienced in a theater instead on your TV.