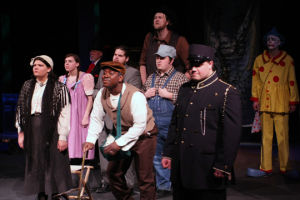 “Elephant’s Graveyard” opened last weekend at Andrew J. and Georgia Neese Gray Theatre. There were two showings, one on Friday night and another on Saturday night.

The play was unlike any Washburn has seen before. Instead of the actors acting out a play, they tell the audience a story about an elephant with a tragic ending. Though the tale is a sad one, there is humor to break the tension.

The cast is separated into three groups, The Circus, The Town and The Railroad, the story set in September of 1916 in the muddy town of Erwin, Tenn.. They all come together to tell the story about Mary the elephant, and her tragic ending. The engineer played by Lawrence Brown, the Ringmaster played by Chris Waugh and the Hungry Towns person played by Jason Jones are the three who tell most of the story and lead the tale, with the rest of the town telling their point of view, as well.

Tony Naylor, an associate professor in the theatre department, is in charge of set and light design kept the stage simple and the lighting dramatic. With so many characters on stage the entire show, the lighting helps distinguish the mood as well as who is speaking at the time. The set is kept simple with a drawing of the railroad system on the floor and in the background circus posters are hanging depicting Mary.

Sharon Sullivan, an assistant professor in the art department, in charge of costume design did an exceptional job dressing each character. They each had their own personal flair that aids the audience in figuring out which character is which. The muddy townsperson, played by Ashley Vaughan, looked muddy dressed all in brown, the Ballet girl, played by Maknzee Gabler, looked like one you would see at a circus dancing with an elephant and the Strongman, played by washburn graduate Michaul Garbo, looked like he could lift an elephant.

The costumes were designed by Sullivan but the construction of the costumes was done by the theatre workshop students, who were also responsible for the set construction.

Paul Prece, director, compares the play to a docudrama, where many voices are telling a story instead of reenacting it. He describes it as a group storytelling, as if the characters are telling the story for the first time, and adding their own personality to what they say. All 15 actors tell their story at the same time, and it comes together very well in this play.

The play will show again this weekend Friday and Saturday Feb. 25 and 26 at 7:30 p.m. and a matinee performance Feb. 28 at 2 p.m. Washburn students get in free with a WU ID and $5 for those who aren’t students.