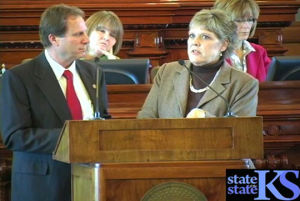 “I’m also having a problem with the implied implication that union members aren’t smart enough to know how their union operates,” said State Representative Judith Loganbill (D) on the floor of the Kansas House Wednesday.

The Kansas House debated a bill Wednesday that would ban Unions from making a deduction to a paycheck at the request of the employee if the funds are later used for political activities.

Unions say this is payback for failure to support conservative Republican candidates who won the Governor’s office and Kansas House in the 2010 election cycle.

But supporters say the bill would give employees more freedom to decide where their donations go and point out that employees are still free to give money to a political group after they receive their paycheck.

“What this bill does is gives the employees the choice of whether they want to support a political group or a PAC or not,” said State Representative Rick Billinger.

After heated debate, the House voted 80 in favor and 36 against the bill and will be set for final action potentially later this week.

Also at the capital, the Kansas House voted on an anti-abortion bill that would make major changes for both doctors and patients. The bill that carries a number of Governor Brownback’s promised changes to abortion laws was debated at the capital Wednesday.

Among other things, the proposed law would now require consent from both parents of a minor wanting an abortion, remove the mental health exception to a late term abortion and allow the husband or parent of a minor to bring a lawsuit against an abortion provider.

The House voted in favor of this bill and a bill that would determine when a fetus feels pain Wednesday. Both bills will move to the Kansas Senate after final action later this week.