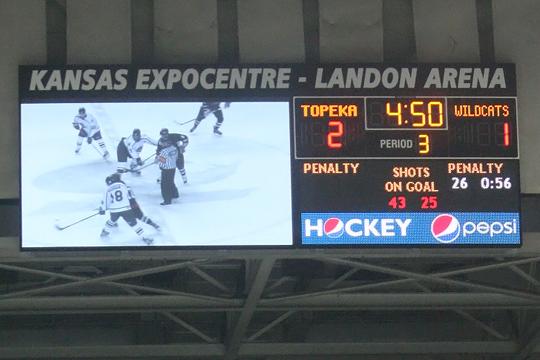 What’s the score The Topeka RoadRunners battle the Wichita Falls in a recent home game at Landon Arena of the Kansas Expocentre. Upgrades have given the arena new scoreboards with video capabilities, which will give the arena more marketability for potential events in the coming future.

While it’s been less than a year since the Kansas Expocentre’s Landon Arena was approved for a facelift, and roughly four months since the improvements were installed, it hasn’t taken long to see how videoboards can make a difference for an arena.

Shawnee County Commissioners Shelly Buhler, Vic Miller and Ted Ensley voted 3-0 on Feb. 15, 2010 to approve a project that allowed the arena to update their 13-year-old scoreboards, nine advertising signs around the base of the balcony, and the marquee sign outside of the arena.

Phil Thompson, marketing manager for the Kansas Expocentre, said most of the reasoning for the project simply consisted of the technology being outdated.

“The marquees that were in here, it was either a matter of replacing them or realizing they were going to get to the point where we’re no longer going to have a marquee because the equipment in here was so old, the company didn’t even manufacture parts for it,” said Thompson. “We couldn’t get service for it. It was either going to go black and you end up with just a scoreboard or you had to do what we did.”

Thompson worked for CJOnline.com prior to his current position and said his interest during the early proposition of updating the scoreboards was part of what lured him to move to the Kansas Expocentre as he spoke with their general manager, H.R. Cook.

“It [the videoboard proposition] was very exciting,” said Thompson. “In fact, it’s one of the reasons I came to work here. When I originally spoke to H.R. about doing marketing here, he was in the process of trying to make the videoboards happen.”

Thompson, who has also worked for Wolfe’s Camera Shop in Topeka, helped design Wolfe’s website before he moved to CJOnline, helping maintain that website.  He said he always loved the technical side of projects and uses a collaborative effort of his skills in his new position.

The project helped eight Washburn students get their foot in the door for day operations of events. Topeka RoadRunners games are currently the main attraction at Landon Arena.

“I have eight people who’re all [mass] media students at Washburn who I’ve hired to run everything,” said Thompson.

“They run the switcher, they operate the actual boards themselves, and then we have three camera operators for every game, so it takes five people to run positions that didn’t exist a year ago. So, it’s pretty extensive. They’re here for four hours for any given hockey game and with the demolition derby, they were here for nine hours.”

Jen Montgomery, Topeka RoadRunners account executive, said that the videoboards have brought a new way for the team to go about its presentation that was never possible before.

“The videoboards opened a new realm of entertainment and marketing,” said Montgomery. “I think that there’s still a lot more we can do with them. I know I’ve been to other arenas that use videoboards and there are endless opportunities for us.”

Paying for the videoboards was a worry when the idea was presented to county commissioners, but according to a Feb. 15, 2010 article from the Topeka Capital-Journal, the $931,455 project allowed for a lease-purchase agreement, meaning the Expocentre will use a 75 cent facility fee per paid ticket at most events to reimburse the county.

Montgomery knows while the videoboards will take time to truly have a revenue effect for the team, the potential is there and expects an increase in interest during the team’s offseason. The team has filled a majority of their dasher space, compared to roughly half last season, and has had more interest this season from corporate sponsors.

Thompson is also just looking at how it can enhance an event that would have already attracted a fair amount of attention just with its notoriety.

“It can take an event like boxing and make it that much more exciting for the people that are here,” said Thompson. “Then it becomes the word of mouth around town of ‘you should have been at the boxing event. It was really cool because you could see the close up on the video screen. You have to come the next time they do this because we were 30 feet back, but then they showed the replay and you could see the sweat flying off the guy’s face.'”

And while there is much more that Thompson and Montgomery plan to do to enhance their usage of the videoboards, both have a goal in mind of putting their best ideas on display in May, when the RoadRunners host the Robertson Cup, a round-robin tournament that decides the North American Hockey League season champion.

“We’re definitely pulling out all the stops for the Robertson Cup,” said Montgomery. “It’s a national tournament and not only is Topeka on display, but our arena’s on display, and we want it to be the best it can be.”

Prior to the Robertson Cup, Thompson also has a daily goal.

“I try and actually challenge myself and the crew I work with to come up with new ways to use the videoboards every week,” said Thompson. “And so far we’ve done it. We’ll find a new way that makes us go ‘oh, I didn’t know we could do that kind of animation’ or ‘it’s really cool how we can tie all these things together with as simple as a single button push.'”