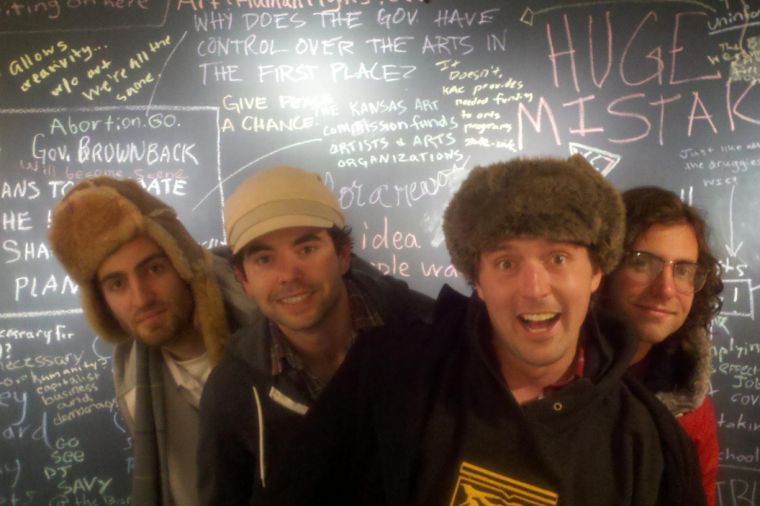 With over 15 million views on YouTube, more people are finally starting to take notice of sketch comedy troupe Good Neighbor, as evidenced by their recent free show at the University of Kansas’s Hashinger crises, dancing businessmen, mischievous lion, and free pizza.

Kyle Mooney, Beck Bennett and Nick Rutherford formed Good Neighbor after performing weekly improvisational comedy shows together at the University of Southern California.  They have since become one of the premiere sketch troupes to hit the internet.

“We decided when we graduated that we would try to form a touring sketch group and take our show on the road,” said Rutherford.  “We originally planned on having this kind of green tour on this bio-diesel bus that never manifested.  It was just a fantasy.”

The first attempt for Good Neighbor was an ill-fated trek to the East Coast, performing at schools, clubs and bars.

The secret ingredient to the triple threat trio is Dave McCary, a childhood friend of Mooney, who acts as Bosley to the troupe’s Angels by directing and editing their videos.

“Every video that you see is pretty much because of him,” said Rutherford.

A key to the success of Good Neighbor is that the group enjoys each other’s company, going so far as to have all four members sharing a roof.

Before reaching over 60,000subscribers on YouTube, the group tested the waters of internet comedy on Google Video.

“I just think that we thought that Google Video had just as good a chance as YouTube to be popular,” said McCary.

The catalyst for the group’s videos were successful groups such as the Lonely Island, now featured prominently on “Saturday Night Live” and Human Giant, which featured “Parks and Recreation” star Aziz Ansari.

“There were definitely people that were starting to get wide audiences because of internet videos,” said Mooney.  “So I think that was, like, always a part of it when we first started.”

Eventually, Good Neighbor made a video strictly for the purposes of gaining viewers by turning tabloid headlines into a sketch starring a preschool girl as a pregnant Jamie Lynn Spears in the style of TMZ.

“That one went crazy big overnight,” said Rutherford.  “Perez Hilton blogged about it or something.  That kind of put us on the map and drew a lot more attention to our existing videos that we had on there and got us a small following.”

The success of the video led to Good Neighbor performing live show at the Upright Citizen’s Brigade Theatre in Los Angeles, Calif.

Good Neighbor’s cult following and showing their video “Is My Roommate Gay?” on the Comedy Central program “Tosh.0” have garnered the group offers for bigger projects, such as Mooney and Bennett recently appearing in a Carfax commercial.

“For a while, this was sort of just when we were starting the group up, we got noticed by management companies and stuff like that,” said Bennett.  “We started pitching television shows, which brought us away from developing stuff online.”

The members now focus solely on making new videos full time and have begun partnering with like-minded peers with more experience and larger audiences to create a richer experience for their fans.

“I think we’re finding out that the faster we put out videos, the faster our fan base grows,” said McCary.  “The more we get contacted by people who can put us in a position like this to play colleges and every once in a while, we’ll get contacted by someone in the entertainment industry that just wants to, like, potentially feel out if we have a bigger project that they could get behind.”

With nearly 50 videos online, Good Neighbor enjoys that they can still have brand new fans discover their work.

“We read comments here and there,” said McCary.  “It’s fun to see people like, ‘Wow, I can’t believe I haven’t found out about these guys.  I’m so glad I finally did,’ or whatever.  I feel like that will always happen, hopefully.”

The group jokes that popularity will be the downfall in the quality of their output.

“When everybody knows about us, that’s when we’re going to blow it and probably start putting out terrible videos,” says Mooney.

While the audience may grow with the video output, Good Neighbor hopes to keep the value at a high level.

“It’s kind of this balance of we really have to be at the top of our game to produce a video that we’re proud of, that’s true to us, and get it out on time, and keep them coming out consistently,” said Rutherford.

Fans will no doubt observe the clothing worn by Mooney and his compatriots for comedic effect, whether intentional or not, including various woodland creatures and rhythm and blues songstress Sade.

“We all like to shop at second-hand stores,” said Mooney.  “Goodwill, Salvation Army, every now and again, I’ll cheat and go on eBay for something that I really, really like.”

The other members assure that Mooney has a love of nostalgia and childhood, but he also has statements for critics of his fashion sense.

“It makes me feel good,” said Mooney.  “I like to wear things that interest me.  I feel like I’m not into cats, because I do like cats.  If I wear a Star Tours shirt, which is a ride at Disneyland, I actually really, really like Star Tours.  I don’t think I’m ever, like, faking it”

Good Neighbor also wants everyone to know that they have four dog shirts.