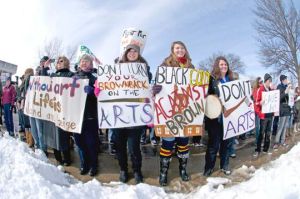 The governor signed Executive Order No. 39, which would have gone into effect July 11, 2011, but was reversed by the state house budget committee Tuesday. The order would have taken away $1.1 million in state funding and dissolved the KAC and replace it with a privatized non-profit. Kansas would have been the only state in the union with no state funding for art.

The ‘Rally for the Arts’ was last Thursday outside the state judicial building and attracted hundreds of Kansans armed with letters and signs to protest the loss of state funding for the arts. The rally was organized by Washburn alumna Sara Myer and began as a Facebook group that quickly grew and led to the rally.

John Lothenore is a massage therapist and local artist who is involved in theater and has been a performing concert pianist for almost 30 years.  He emceed at the rally, introducing the three speakers: Shannon Reilly of Topeka Civic Theater, state Sen. Roger Reitz (R-22nd District) and Harry Schwaller, chairman of the KAC.

“It started with Sara Myer being amazed that anyone would cut the arts in Kansas, especially the KAC,” said Lothenore. “She was very vocal and outspoken from the beginning and started the Facebook page.”

Myer, who is active in Topeka Civic Theater and local art, said that the rapid growth of the Facebook page inspired the rally.

“We thought the next logical step was to start a rally,” said Myer. “We all had connections to get everything together.  It was like it was meant to happen.”

At the rally, volunteers asked attendees to sign a roster and encouraged them to contact Kansas legislators. Volunteers handed out postcards for those who may not have already written letters before arriving.

“Hopefully people will bring letters to senators and representatives,” said Myer. “There are some that are still on the fence.”

Myer thought that despite it being 29 degrees Fahrenheit during the noon rally, the turnout was “pretty decent.” Washburn students were there with signs making their voices heard as well. Several concerns were expressed.

Kaylee Hesse, senior art major, worried about the effect a lack of state funding will have on the job possibilities after graduation.

“If we don’t have a future with arts funding, that means no jobs,” said Hesse.

Vivian Mosier, sophomore art major, wants legislators to know that college students, who make up a large part of the voting population, feel strongly about this issue.

“I think it’s important,” said Mosier. “I want them [legislators] to know we think this is important.”

Myer, who has a six-month-old daughter with her husband Greg, is concerned about what the lack of state funding will mean for art opportunities for Kansas children.

“I want there to still be arts for my daughter when she gets older,” said Myer. “I want her to have the same opportunities I had.”