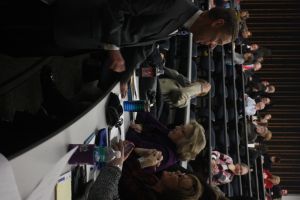 Among the things that Washburn President Jerry Farley wanted to speak about was the current status of some items that have been underway including the overall status of the budget so far this year, including the issue of salary increases for faculty and staff as well as addressing the formal arrival of new members of the administration staff.

Another item that was brought up was the recent snow and the costs of keeping the campus clear of snowfall.

Farley also praised recently inaugurated Gov. Sam Brownback for recommending that state budget for higher education not be cut. Farley expressed hopes that the state legislature would heed Brownback’s words and not create another budget shortfall for the university.

Lastly the president also addressed an item of the budget that hasn’t seen change in a couple of years.

The president specifically recommended a two percent cost of living increase to salaries. Farley emphasized that at this point, the recommendation is just that and would need to pass the Washburn Board of Regents.

He also went on to state that he still felt it was important to do what the administration could do to get better benefits for the faculty as it would have a direct impact on the school’s ability to hold onto faculty and recruit new members as needed, staying competitive in the national market.

After his remarks, Farley turned the dais over to Randy Pembrook, the new vice president for academic affairs at Washburn.

Pembrook opened his remarks by thanking those that had welcomed him to campus and reflected on the new first year experience program and his take on it.

“I think [first year experience program] will help develop an identity with the institution for the students,” said Pembrook. “It will help them develop some great habits in terms of research and studying and personal health and I think it’s an exciting part of the future for Washburn.”

Pembrook also expressed his belief in the transformation of the general education curriculum as he equated the program as a foundation and a way to as he termed it, “enrich the major and enrich life.”

Pembrook concluded thanking the assembled faculty and stating that he looked forward to working with everyone in the future.

Farley then took a moment to recognize Nancy Tate, formerly the interim vice president of academic affairs for her work over the last nine months to help fill until someone new could be appointed to the position permanently.

Following introductions, Farley made a few announcements and the meeting was adjourned.