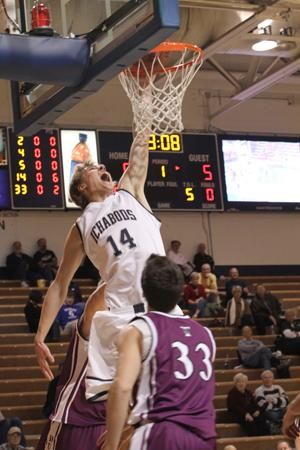 Washburn moved into a third-place tie with the University of Nebraska-Omaha with a 72-61 win over Truman State University on Monday night. With the win, the   Ichabods continue to follow the season’s up-and-down nature followed with a two-game skid by another win streak.

“We felt like we gave away the game to [University of Central Missouri]. We didn’t make the plays we needed at the end to come out with a win,” said Bobby Chipman, sophomore forward.

This season, the Ichabods have been a team trying to find its identity and at other times looking like a title contender.  For some teams, this could be too much pressure to handle.  The Ichabods have shown they can get back to its winning ways, displaying an ability to put losses behind them and focus on the positives.  Washburn has continued to learn from its mistakes and grown from the experience.

“After those two tough losses, we refocused as a team and have been able to grind out our last two wins,” said Bobby Chipman.

Washburn entered Monday night’s game needing a win to move its way back up the MIAA standings.  The Bulldogs had thoughts of putting an end to the Ichabods home win streak and doing something only one other team has done this season; come away with a win in Lee Arena.

In a defensive battle, the Ichabods led at the intermission with Logan Stutz adding 15 first-half points.  The theme stayed the same throughout the second half as the Ichabods pulled ahead by seven points but the Bulldogs cut the lead to one, three different times.  Every time the Ichabods tried to put the game away, the lead would slip back into a tight game. Nate Daniels, senior guard, put the game out of reach with 2:44 to play with a steal and a layup, propelling the Ichabods to a 72-61 win.

“It wasn’t pretty, but at the end of the day it goes down as a win,” said Bobby Chipman.

One thing has stayed consistent for Washburn, adversity has not proved to affect the team.  If it has a rough night offensively like in the Thanksgiving Invitational, it comes back with a barrage of 3-pointers the following game.  When it struggles with defensive intensity against Missouri Western State University and gave up 102 points, the following game the Ichabods held the Central Missouri to under 50 in their best defensive outing.  The Ichabod fans have not had to endure any long losing spells or poor play on the court this season.  The season’s other consistent has been Stutz who has played well all season.

“I owe a lot to the team,” said Stutz, senior forward. “Our team chemistry has been great on and off the court and it has showed this season.”

Stutz recorded his fifth double-double this season, and seventh of his career, with 24 points and 10 rebounds. Stutz entered the game as a three-time MIAA player of the week and only player to receive the award more than once.  The senior forward holds the nation’s highest field goal percentage at 71 percent and is still averaging more points than any Ichabod this decade.

“I have been working hard by getting into the gym and staying focused,” said Stutz. “It’s my senior season and this team has a chance to accomplish something. I don’t want to have any regrets.”

Up next, the Ichabods host MIAA leader and No. 8 Missouri Southern State University, in Lee Arena.  In the first meeting between the two teams, Washburn jumped out to a 10-point lead but MSSU rallied for a 90-73 win in Joplin, Mo.