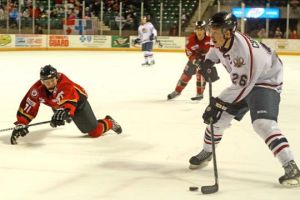 The Topeka RoadRunners had another questionable period Friday night against the Corpus Christi Ice Rays. Fortunately, like the night before, they also followed it up with a three-goal period.

One night removed from a second period where Topeka (30-8-3) was outshot 15-5, the RoadRunners also struggled in the first period Friday, getting outshot 11-3. But a strong second and third period negated the first period as Topeka pulled out a 5-3 victory over the Ice Rays.

Topeka’s Cory Ramsey scored the game-winning goal on a 5-on-3 powerplay at 16:53 after Corpus Christi tied the game with goals at the 13:16 and 14:52 marks. Ramsey’s goal was greatly attributed to a sharp pass from Brian Christie.

“Christie won the battle in the corner and I snuck down in front and he gave me a great pass backdoor,” said Ramsey.

Topeka coach Scott Langer, while not pleased with his team’s effort in the first period, was overall satisfied to get the two points in a game that seemed up in the air after Corpus Christi (17-25-2) was able to tie it.

“It’s good hockey– both teams are having to work so hard,” said Langer. “We were just fortunate to come out on top tonight, ‘cause it could’ve gone either way.”

In the first period, while being outshot, Topeka was able to hold off Corpus Christi off the scoreboard until the 17:52 mark when Beau Walker knocked the puck past Eric Rohrkemper. But, at the 2:14 mark of the second period Zach Schrotenboer slipped a shot past Pheonix Copley to tie the game. Just over six minutes later, Kyle Sharkey found himself alone in front of the goal and beat Copley with a backhander to give Topeka the lead. Michael Hill went hard to the net and put the puck past Copley at 12:16.

The RoadRunners outshot the Ice Rays 12-5 in the second period.

But as the game looked to be in the bag for Topeka, Corpus Christi fired a rebound past Rohrkemper at the 13:16 mark and then tied the game on another 5-on-3 at 14:52. The Ice Rays’ goal at the 13:16 was their first even strength goal of the series.

Ramsey’s goal then gave Topeka the lead and after Copley was pulled for an extra attacker, Hill registered his 60th goal with the team, a franchise record, at the 19:59 mark.

The two teams play the last of a three-game series tonight at 7:05 p.m.