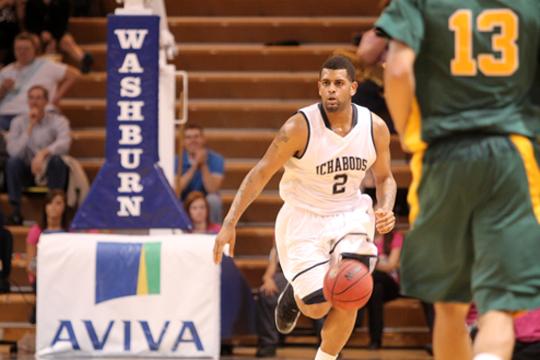 The first half saw three lead changes and the Ichabods were only able to get up by six at the 6:29 mark. After that, the lead was chopped down to a tie going to end the half. The Ichabods only hit 43.8 percent of their shots in the first half but were able to grab twice as many rebounds as the Lions. Senior forward Logan Stutz led with seven points and five rebounds.

In the second half, there were three led changes and the Ichabods could only get up by seven points at the 9:43 mark.

The Ichabods made their last pull away with 1:53 left to play. De’Andre Washington scored the last six points of the game, all-coming from the free throw line.

The Ichabods out-rebounded the Lions 27-17 in the second half. The Ichabods total rebounds for the game was 45, with 21 second-chance points. They also led with 10 fast break points.

Stutz led the team with 20 points, 10 rebounds and five steals. Washington had 12 points and 12 rebounds, giving him and Stutz the only double-doubles for the Ichabods.

Alex North was the Ichabods’ sixth man, coming off the bench and scoring nine points and snatching nine rebounds in 29 minutes of play.