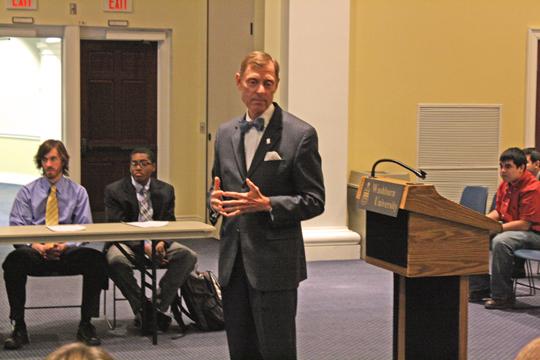 The university budget was the main topic of last Wednesday’s WSGA meeting, particularly the idea of another tuition increase.

The meeting began with Washburn University President Jerry B. Farley addressing the state of the budget to the senate and how the steady increase of tuition has compared to other state public universities.

According to Farley, Washburn has managed to stay well below state, midwest and national averages in the past 10 years, increasing 92.8 percent.

“I don’t think [KU and K-State] can sustain that over the next ten years at that kind of increase,” said Rick Anderson, vice president for administration and treasurer. “I think you’re going to see more of what Washburn looks like, maybe 3 or 5 [percent annually].”

However, Washburn students will now have a say on the possible increase of tuition.

WSGA president Caley Onek and vice president Lucas Mullin announced the creation of a tuition task force, headed by WSGA senator Shea Kirsop, which will allow students’ voices to be heard by the Washburn Board of Regents when the time comes to consider the tuition increase.

“Basically, I wanted to appoint a select committee which, constitutionally, is a committee that is set out over a certain period of time to look into a specific topic that we feel is necessary for our senators to look into,” said Onek. “We have been talking with our administration, with President Farley, with Vice President Anderson and with our own Washburn Board of Regents just about the budget situation that we do have right now and what a tuition increase means to students.”

According to Onek, the committee will communicate with students to educate them about the budget situation and gather input.

“What we would ultimately like to do from the collections of all these finds is we would like to have the WSGA senate vote on a resolution from what we find out from the students on whether the regents should vote to increase tuition or keep it the same,” said Onek.

Onek also said the idea for the task force was brought about after the inquiry of several regents, who want student input before deciding to make them pay more in tuition. She said student government associations at many other universities have similar systems in place.

Alongside gathering opinions, Mullin said a huge concern is letting the students know what possible repercussions are in store.

Mullin also believes it is important for the students’ voice to be heard when dealing with student money.

“Education is a big thing and I think it’s great that the administration is getting us involved,” said Mullin. “I think we’ve kind of been there in the background a little bit but I think it’s really good that we’re taking a more direct role and we don’t know how the students will react.”