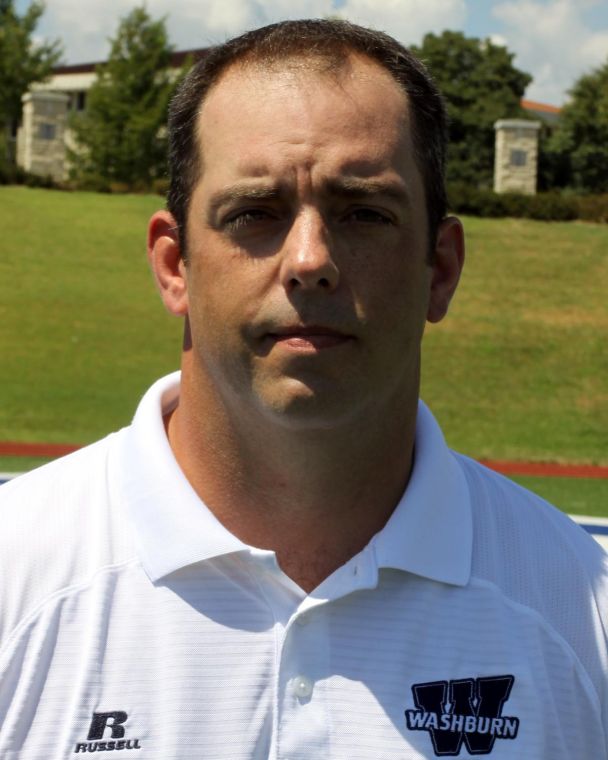 New territory The Washburn Ichabods new defensive coordinator, Cooper Harris, is ready and excited to take on the his new role next season. Harris defense shared the responsibilities with Chris Brown last season as the co-defensive coordinator. Photo courtesy of Washburn Sports Information.

With the changes of the seasons, both sports and weather, comes the inevitable transitions, which emanate from success. For one person the world is changing in more than one way.

Defensive coordinator Cooper Harris is entering his tenth offseason on staff at Washburn. What makes this year different from previous is his increased responsibility both in his job as a coach and his newest job as father of a newborn daughter.

Harris is a fixture of Washburn’s coaching staff having come through an interesting road to the defending Kanza Bowl champion Ichabods staff. Harris started off his collegiate career playing at Independence Community College. Harris then transferred to Pttsburg State University (Kan.) where he played as a linebacker for the Gorillas from 1992-94, assisting the team in bringing the national title home his first year.

“Playing at a school like [Pittsburg State] was a real influence on me, being able to be around that staff,” said Harris.

After a stint playing professional football in the Canadian Football League, that included playing on two Grey Cup championship teams, Harris decided to return to school at North Dakota University where he pursued a masters degree while serving as a graduate assistant.

“Coaching was really the next progression of my career,” said Harris.

Serving just one year on the staff at NDU, Harris was contributed to winning a national title for the Fighting Sioux in 2001. After the season was over, Harris was looking for a full time coaching opportunity and one happened to open up with Washburn as the school had at the time just recently hired then- new head coach, Craig Schurig. The two had been at Pittsburg State together as coach and player when Schurig served on the defensive staff.

“We had just got to Washburn and we were putting together a staff,” said Schurig. “The chance to bring [Harris] here was one that we felt very fortunate to be able to accomplish.”

As the staff has only recently seen turnover with coaches heading off to assume new roles at other schools, the chance to move up the coaching ladder at Washburn has been one that has required patience.

“With [Former Defensive Coordinator] Chris Brown going to Fort Hays State [University] to take over there it was one of those things where Coop had been with us a long time and been offered positions at other schools before,” said Schurig. “We are just very fortunate that he could stay with us.”

One of the key parts of keeping Harris at Washburn has been his marriage to his wife Summer, who is also part of the athletic department as the marketing director. The Harris family with the recent birth of a daughter has also added to the family atmosphere that is a cornerstone of the athletics department at Washburn.

“The challenges of having a young family is one that can be tough sometimes,” said Schurig. “When both people have jobs that can get busy during certain times of the year being able to work out the details is something that they’ll have to work out. I had the same thing with my wife when I was a coach at Pittsburg State.”