Lady Blues bounce back with win 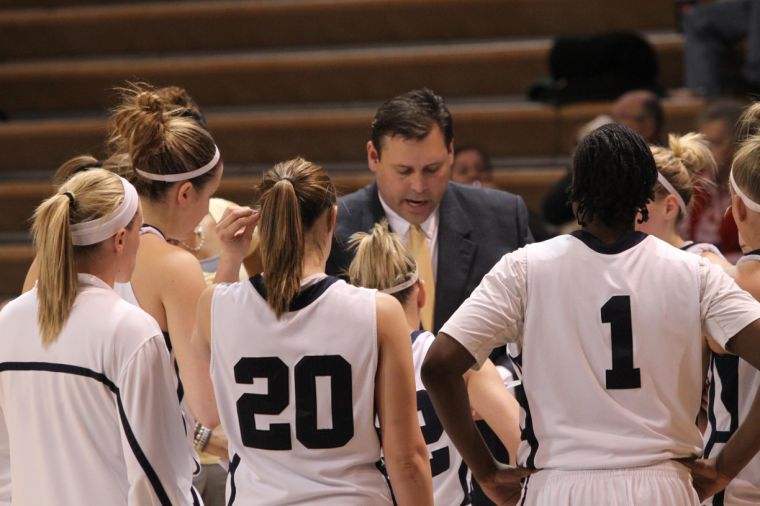 The Lady Blues basketball team suffered its second loss in a row Jan. 26 on the road against the Northwest Missouri State University Bearcats, 63-71.  Washburn put up a valiant effort, leading their opponents by double digits early in the first half, but couldn’t contain the No. 23 Bearcats in the second half.

McHenry also acknowledged the hard-hitting competition from the Bearcats.

“They hit some big shots,” said McHenry.  “We didn’t hit big shots.  I don’t think we scored in the last five minutes, and the game was over.”

Saturday saw the polar opposite as Washburn brought vengeance upon the Missouri Western State University Griffons 95-74, avenging their first loss of the season. The Lady Blues took an early lead in the game and kept it throughout, leading by 32 points at one point and set a new school record by sinking 17 three-point shots, including eight by junior guard Stevi Schultz.

The game against the Griffons saw a distinctly different style from WU, as was reflected by their 21-point victory. The Lady Blues played with the confidence the team hsa displayed all season and played sound, fundamental basketball.

“[Saturday] we did a better job of scoring and taking advantage of what the defense gave us,” said McHenry.  “Obviously, our shooting was on here at home.  We loved the rims tonight, and the balls were good tonight. I thought, offensively, we played decently at times against Northwest, it was just ten minutes of stretch when we didn’t score.”

A challenge facing the Lady Blues this season has been managing to win games on the road, which McHenry recognizes and is working to correct. McHenry also said it was important that his team put the losses behind them and move on to the rest of the season.

“The kids got their heads up,” said McHenry.  “They were playing pretty confident, and that’s great, especially after two losses.”

The combination of losing two games in a row and bad blood from the past played a big role in Saturday’s contest. The Lady Blues came out focused and with one goal in mind: to get back on track.

“Losing those last two games kind of led into [Saturday’s] game,” said Schultz. “And the fact that we lost to Western last time.  It was kind of a revenge game. There was no way we were going to lose this game.  We were just revved up for it and ready to go, but we got the win, and we’re excited about it.”

The Lady Blues contest against the Truman State Bulldogs has been postponed  to Thursday. In the event that Truman cannot make the trip, the reschuled date will be announced on Thursday.