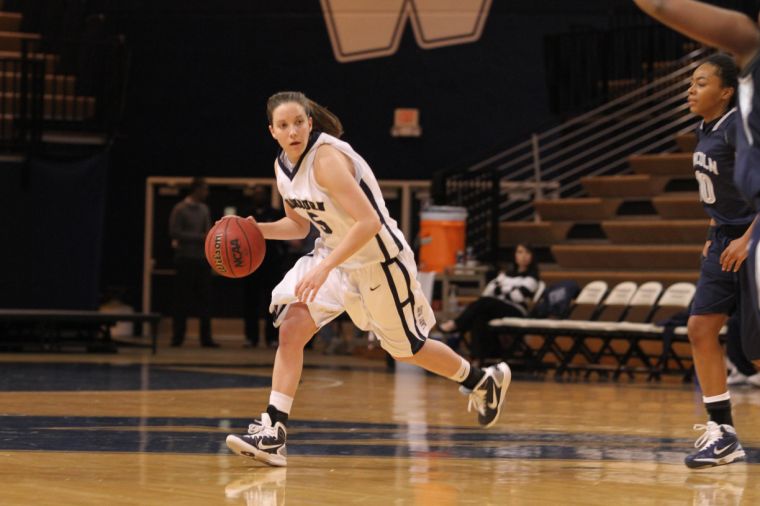 Washburn lost to Emporia State 61-52 Saturday night as they end their run in the MIAA tournament. The Lady Blues now wait to find out where they will be seeded in the South Central regional

After taking a short break from the court because to the snowstorm, the Washburn University Lady Blues travelled to Hays, Kan. to play the Fort Hays State University Lady Tigers.  Washburn put up a respectable brawl, but eventually succumbed to the Tigers, 68-59.

The game marks the first time the Lady Blues have lost to the Tigers since 1994, ending a winning streak of 16 wins in a row.  Washburn briefly led FHSU 4-3 a minute and a half at the start of the contest, but Washburn’s reach exceeded its grasp, and the Lady Tigers quickly came back to be the victor.

While FHSU had a slightly lower shooting percentage at 31.3 percent to Washburn’s 35 percent, they had a higher percentage from three point range, 39.3 to 31.6, hitting 11 of 28.

“We ran into a team at Hays who was pretty high,” said Ron McHenry, Lady Blues head coach.  “I think they had won most of their last six games.  They had been shooting the three awfully well.  You’re always hoping that they don’t really shoot well up against you, and they did.”

The Lady Tigers also hit 15 of 16 from the free throw line, while the Lady Blues hit just 11 of 16.  Possibly the biggest nail in the coffin was Washburn being outrebounded 52-34.

“They played really well,” said McHenry.  “We just didn’t respond to them like I wanted them to.  We just never could get away from them.  That was probably the most disappointing part.  We had some opportunities to score, but we really couldn’t get going.”

Although the Lady Blues put forth great effort, a win was not in the cards for them on Saturday. As Washburn closed the gap, FHSU responded with a big three-pointer to put the women out of reach. Washburn was lead by Laura Kinderknecht who had a career high 18-points, while adding five assists. Megan Lassley also had a career night, recording her first double-double with 14 points and 10 rebounds.

“We played real well,” said McHenry.  “We got it back there to a two-point game with about a minute forty to go, and another three-ball kind of separated the game for us.  We were struggling.  We were probably down there eight or nine for the first stretch of the second half.”

The main focus for Washburn under McHenry’s stewardship has been toughness, which he claims was not present in the game.

Washburn next plays Feb. 9 in Warrensburg, Mo. at the University of Central Missouri, Feb. 12 at Southwest Baptist University, and will return home on Valentine’s Day against Truman State.