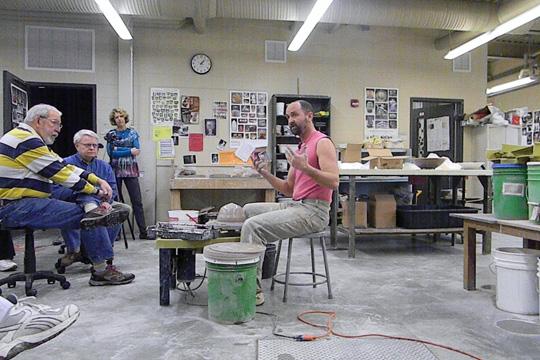 Throwing down Danny Meisinger (far right) instructs a ceramics class on some of the tips he has learned in 20 years of experience. Meisinger currently has work on display at the Mulvane Art Museum.

The artist who created the pottery currently on display at the Mulvane Art Museum visited Glenda Taylor’s Ceramic II class last Wednesday give a demonstration and talk with students about the craft he has practiced for over 20 years.

Danny Meisinger demonstrated creating pottery while talking about ceramics, sprinkled with anecdotes from his experiences as a ceramic artist. During the demonstration, Meisinger threw on the wheel and created several pieces ranging from a flowerpot to a plate to a pitcher.

“The more you can lose yourself in the process the better your work will be,” said Meisinger.

He compared mastering a craft and being creative to traveling to grandmother’s house. After one has the route learned, a traveler gets to notice the things they were unable to notice when they were so busy focusing on just getting there. In short, after one has mastered their craft, they are able to be creative.

Meisinger was born in Topeka but grew up in Overland Park, Kan. He took ceramics in high school and says he enjoyed it but didn’t think of it seriously.

“I did well at it but never intended to be a potter,” says Meisinger. “I was going to be a horse trainer.”

After Meisinger decided training horses was not the avenue for him, he took ceramics classes at Johnson County Community College and also at the University of Kansas for a year. He built a studio in his mother’s barn and left KU in 1989.

His first show was at the Mulvane. He frequented art fairs for many years and is now getting more involved with gallery exhibitions. He is building his new studio in his barn and has five pottery wheels going at one time. He also has a family oriented gallery called Dolphin Song in Gardner, Kan.

In his demonstration, Meisinger covered topics about throwing-operating a pottery wheel-including: Centering, tools, wheel height, cutting and the importance of changing positions while throwing to keep joints healthy. He also talked about how he makes his slips and glazes and the process for throwing his larger than life ceramic pieces.

His biggest tip for mastering ceramics is repetition. He also encouraged students to learn and try different ways to find what works best for them.

“If you want to build skill as a potter do things not hundreds of times but thousands of times,” said Meisinger. “The way to make pots well is to make them all the time.”

Students found the demonstration to be exciting and informative. “I thought he was down to earth and very knowledgeable,” said Rachael Johnson, a sophomore art major in Taylor’s ceramics class. “I really liked how he explained his methods,” said Johnson.

Taylor, chair of the art department and ceramics professor, says the reason she invites guest artists is for students to see another approach to the craft, something that is a great opportunity for students and other art enthusiasts.

“He came and he showed us some of the basic things he does and his process,” said Taylor. “I think it’s great. Students always get inspired by that. I thought it was a good day.”