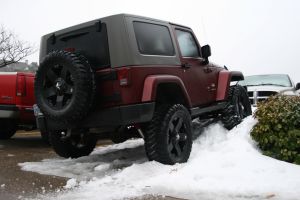 How hard is it to look up the weather for the week? In the day of high-speed internet and smart phones, it isn’t very hard. You could even go the old fashioned way and look in a newspaper.

So, why is it that when there is a layer of ice covering every sidewalk and parking lot on Washburn’s campus, there wasn’t magnesium chloride put down before it happened? It was more dangerous to walk to class than it was to drive to campus on Monday.

There is a cost to pay to get the magnesium chloride and to use the man power to put it on all the sidewalks, but student safety should be first. When 10 minutes in between classes isn’t enough time to make it because the students need time to lace up their ice skates, it is time to get on the ball and put some salt down.

Also, we have never witnessed such an unconventional way of removing the snow in the parking lots as this year. The piles of snow in the Henderson and Village parking lots are taking up way too many spaces. In each row, there are at least eight spaces taken by huge piles of snow. It adds to the inconvenience that there are barely enough spots without the mountains of snow.

To make matters worse, people who try to use the parking spots with snow in them are being written tickets. What happened to snow rules? If there isn’t anywhere else to park is the student just supposed to leave and forget class? The Washburn Police Department doesn’t have any sympathy for the students trying to use the space to the best of their ability. The claim is that these cars are making the parking lot unsafe to the rest of students by sticking too far out in the lane. However, the big piles of snow are the basis of the problem.

Lastly, Washburn is due some respect for wanting their students in the classroom learning. Canceling classes on Monday like Kansas State did would have been a rash decision seeing as the weather wasn’t bad enough to justify missing an unnecessary day of classes. But there comes a point when student safety is more important than making it to class for a day.

We are college students completely capable of keeping up on our studies. And for those people who aren’t responsible enough to do that will be wasting their own money. But isn’t missing one day of school worth keeping 7,000 students safe?