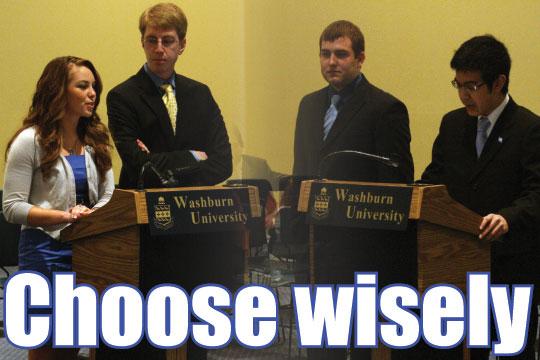 In the midst of last Wednesday night’s Washburn Student Government Association meeting, a pair of teams announced their intentions of running for the 2011-12 presidential and vice presidential WSGA seats.

Taylor McGown, current budget director for WSGA and president of Bod Squad, was the first to announce her campaign for the presidency alongside vice presidential running mate Michael Kitowski.

McGown said her goals as president would consist of a switching from Angel online education platform to Blackboard, having a Bod Night where one night a month would be set aside to bring in free entertainment and increasing access to Mabee Library to 24 hours a day.

“This could create more on-campus jobs and pretty much make our university more marketable,” said McGown. “A lot of campuses around us already have a 24-hour access library so we feel that this would be something that would use the student’s money for the greatest benefit for everybody.”

McGown said she and her running mate had spoken with Alan Bearman, dean of university libraries, about the idea and he supported it, although the plans currently drawn up for increasing the library to 24-hour access are not plausible. However, McGown said they would work toward a “compromisable solution.”

The goal of switching online education platforms to Blackboard after two years with Angel came because of student input, and the change would eventually be necessary as the company was purchased by Blackboard. The switch to Angel in 2009 after Washburn’s contract with WebCT expired cost the university $117,700, and the contract is set to expire in February 2012.

“We just feel that the students want to check their grades, they want a better system,” said McGown. “Angel is not user-friendly from what we’ve heard from students. Angel is down a lot and Blackboard has an uptime of 99.9 percent, so we feel that’s a good step we can make as a university.”

The other campaign announced at the meeting was that of presidential candidate Tengku Rizki Aljupri and his vice presidential running mate, Nic Campbell. Aljupri, a native of Jakarta, Indonesia, is currently the talks and topics director for the Campus Activities Board, president of Delta Chi fraternity and a senator in WSGA.

“I have a dream that someday when I go back and visit Washburn University either as an Indonesian senator, Indonesian minister or even Indonesian president, I can tell the students at that time ‘Hey, that’s what I did as student body president,'” said Aljupri.

During his announcement, he spoke of the nature of American politics and urged senators to make sure they voted for the candidate with the best platform rather than just voting for their friends.

After the meeting, Aljupri stood by his assertions that the presidential race often becomes a popularity contest instead of a political contest.

“The campaign has officially started tonight, but I’ve heard from several senators that they already made their decision even yesterday and they didn’t even know what the goals were. If they think that the goals of the other candidate are better, that’s fine, vote for that candidate. Let’s not make decisions before you know what this candidate is going to do.”

Alongside his goal of adding a radio station on campus to both entertain and keep students safe, Aljupri also saw a need to increase school spirit. His solution is to get student athletes and non-athletic students to become closer by having athletes interact in campus through events such as playing video games in the union. An example he used was to have the golf team play “Wii Golf” in the union to increase awareness of the team.

“I think there are several problems in our university that have to be solved,” said Aljupri. “I want the student government to be more involved in issues such as tuition, food service and involvement rather than working as a programming board, because we do have a programming board on campus. It’s great that student government has advanced, it’s great that WSGA has a lecture series, but let’s say that’s not our main job.”

WSGA president Caley Onek, who was elected WSGA vice president in 2009 as running mate to current Kansas state senator Garrett Love before winning her uncontested presidential bid in 2010 with current WSGA vice president Lucas Mullin, said she was excited for the candidates and was ready to see how the election would play out.

“Lucas and I were talking earlier, and he made the statement that this is one of the most exciting times of the school year at Washburn because the students that are running are generating excitement campus wide,” said Onek. “It’s just really a neat time where we get to find out what other ideas students are bringing to the board.”

Mullin, who was named Homecoming royalty last semester alongside McGown, echoed Onek’s sentiments about the election causing excitement on campus.

“Last year, unfortunately, we didn’t have any competition,” said Mullin. “We were excited and ready to get the game on and have a great time with it, but unfortunately we didn’t have that. We still tried to build that up regardless and still had a really good turnout, it was still higher than it was in previous years.”

Mullin also noted the great deal of responsibility that came with the job title.

“It’s 7,000 students that you are leading and you should not take that lightly,” he said. “I think it’s awesome to see people excited already and I’m really looking forward to seeing where it goes in the next four weeks.”