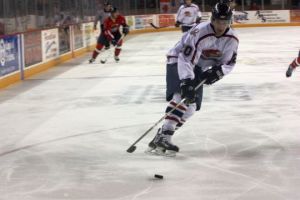 After three consecutive frustrating games, the Topeka RoadRunners put the pieces together on Thursday night.

Aided by a 14-3 shot advantage in the first period and a solid effort the rest of the night, Topeka (43-12-3) finished off their regular season with a 4-2 victory over the Amarillo Bulls at Landon Arena. The victory assured Topeka the North American Hockey League Regular Season Championship and ended their recent three game losing streak.

The team responded positively to the coach’s actions.

“Their focus level and their energy was a lot better tonight,” said Langer. “We did a lot of things prior to the game to get back to what RoadRunner hockey is. They bought in. The last three games, it was tough buying in but we had to do it in a tough way and got it done.”

Topeka did trail early in Thursday’s match. At 7:18, Eric Millisor slipped a shot behind an out of position Eric Rohrkemper to give the Bulls a 1-0 lead. But the RoadRunners responded quickly as Justin Hussar scored a powerplay goal at 9:20, putting a loose puck behind Greg Gruehl.

At 13:12, Jordan Davis made his way around a Bull defenseman and put a shot behind Gruehl to give the RoadRunners a 2-1 lead at first intermission.

Early in the second period, at 4:05, Davey Middleton fired a slap shot past Gruehl. Amarillo responded with a goal at 5:42 by Brooks Behling.

But Topeka’s solid defense and offensive pressure proved to be the story Thursday, as Amarillo developed few quality chances the remainder of the contest. Middleton sealed the game with an emptynet goal at 19:52 of the third period

Middleton said the efforts made by Langer, Enga and Mahood were what the team needed.

“It brought us together as a team,” said Middleton. “We refocused and came out with a team effort here tonight. It was a must-win.”

Goaltending had been a weak point for Topeka over the losing streak, but Rohrkemper stopped 18 of 20 shots in the victory.

“He’s been in games like that,” said Langer. “Last year, he had to win a few of those games for us and he did a great job when it counted.”

Topeka now begins postseason play April 2 when they host the Wichita Falls Wildcats. Faceoff at Landon Arena will be 7:05 p.m.