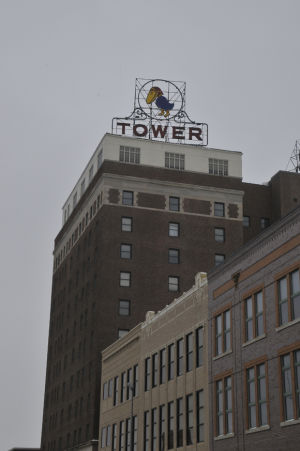 When it opened in August 1926, the Jayhawk Theatre was a major attraction in downtown Topeka. It is important historically as being part of an early “mall” development. The theater could seat an audience of 1,500 people. A balcony capable of holding 650 faces the stage gave every person in the theatre “the best seat in the house.”

E.H. Crosby of the Crosby Department Store, formerly located across the block on Kansas Avenue, built the Jayhawk Hotel, now the Jayhawk Tower, two restaurants in the hotel and the adjoining Jayhawk Theatre, connecting it all with the Jayhawk Walk which featured small shops and windows showing things passersby could buy at Crosby’s.

“It was a mini-mall before anyone even came up with mini-malls,” said Lawrence Tenopir member of the board of the Historic Jayhawk Theatre.

Thomas Williamson, best known as the architect of Topeka High School, was the supervising architect of the theater.  The theater is architecturally significant as a prototype for more than 300 theaters the Boller Brothers (noted theatre designers from Kansas City) designed which included air conditioning, steel and concrete structure with a free standing balcony and the fire exits down front.  It was one of the first theaters to have a balcony with no support on the bottom.

It was one of the first “air-refrigerated” theater, designed to keep audiences cool.  The Jayhawk was primarily a movie palace, but performers loved playing the Jayhawk in the summer because it was air conditioned. Bob Hope and George Burns were among many of the famous people who performed at the Jayhawk.

“We are trying to get volunteers to research year by year to tell us what was going on at the theater and it will be able to answer some more questions,” said Tenopir.

“It was not only important for its fireproof capabilities but it was incredibly comfortable and popular,” said Tenopir.

Artistically, the theater’s décor incorporates Kansas-centric art.  The Kansas-themed mural and the stylized Jayhawks and sunflowers on the proscenium arch. Each Jayhawk was not cast but was individually carved in place on the arch.

The career of musician Gypsy Rose Lee was started when her sister, star of the show produced by their Mama Rose, eloped with another cast member on Dec. 31, 1928, after their last performance at the Jayhawk.  Mama Rose and Gypsy went home to Washington where Mama originated a new show starring Gypsy who eventually moved from vaudeville to burlesque.

“We would like to get her to come back and perform to help raise money because she loved the Jayhawk,” said Tenopir.

In May 1976, the curtain closed on the Jayhawk Theatre for the last time, after 50 years of motion picture and stage entertainment.

“Once White Lakes was built, department stores began moving away.  Then you had Fairlawn Plaza and all the businesses on Wanamaker, where back in the 1960s downtown Topeka was the only place to be,” said Tenopir.

The theater is now owned by Historic Jayhawk Theatre, Inc., a non-profit organization governed by a volunteer board of directors.  The board’s main goal in the upcoming years is to raise $7 million dollars to renovate the theater.

“Every polling that has been done recently shows that the Jayhawk is one of the top things the community wants done downtown,” said Tenopir.

The restoration and renovation will make The Jayhawk usable as a live performance presentation house as well as hosting business meetings, films, lectures and social gatherings.  Restoring the interior to meet building codes will include new lighting, sound, electrical, plumbing and HVAC systems.

There is a “Take Your Seat Campaign” being launched that helps provide the opportunity to help restore and preserve the theater.  Contributors receive the benefits of having their name or designated name permanently attached to a theater chair, name or designated name cast in bronze in the Jayhawk Theatre lobby and the name will be linked to the website donor library.

On April 15 Washburn University Student Media is holding a fundraiser for the Jayhawk Theatre. Details are to be announced.

It is hoped that the Jayhawk Theatre will be a popular and highly utilized destination at the core of downtown Topeka.  It will have the charm of the past with the technology of the future.