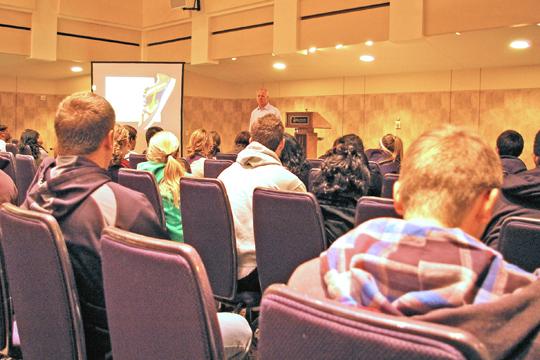 If the shoe fits Jim Keady, founder of Team Sweat and social justice advocate, talks in the Washburn Room last Wednesday about the behind-the-scenes operations of the Nike corporation’s sweatshops. To see them first hand, Keady worked in an Indonesian sweatshop for three years.

About 90 to 95 percent of the clothing people wear in the United States is made somewhere else.  Companies use subcontractors for cheaper labor and most of them involve sweatshops.

Jim Keady, theologian, activist and educator and the founding director for Justice, Inc spoke at Washburn on March 9. He spoke about the injustices that happen in Indonesia with Nike subcontractors.

Keady became interested in conditions in sweatshops after writing a thesis for graduate school.  He also went backpacking around the world and got to see what was happening in Indonesia.

“I was clueless of what was happening, I was a varsity athlete, I was into my fraternity and I really liked girls,” said Keady.

Keady remembers going to Indonesia and seeing that a year after a major earthquake, the country was still in poor condition.  After coming back to the U.S., Keady did volunteer work and had powerful experiences with the poor.

He began his activist work in Indonesia in order to try to improve conditions which people were exposed to.

“Some people say that capitalism is the American way but what we really are about is democracy,” said Keady.

Nike is a $19 billion company that is a leader in the shoe industry and has become one of the 50 top grossing companies in the world.

Currently there are 37 subcontractors in Indonesia and about 50 percent of those workers are being verbally, physically, sexually or psychologically abused.

Keady said that in order to fix a problem you have to look at one company in one country to affect change.  Keady said that to make something happen involves having the U.S. put public pressure on Nike and demand cessation of unfair treatment.

Some of the things that public pressure has done for factory workers are improve women’s rights, reducing abuse towards workers and the cleanup of scrap-shoes.

Keady said one important step was for students to contact Nike to voice their opinion. Ashley Hanson, freshman, thought that Keady presented in such a way to allow for that.

“I thought it was great, it was inspiring, not eye opening but challenging,” said Hanson. “He did a good telling us what we know and how do something with it.”

When Keady personally confronted Nike about the scrap shoe situation Nike did not believe this was happening even though scrap shoes had been dumped for the past 20 years in the same place everyday.

“If you don’t believe me, go see it yourself,” said Keady to Nike.

Nike had to mount clean up efforts, using 180 truckloads and spending over $200,000 on just one site.

Although Nike said that they are working on improving many of the problems that Keady found, workers are still experiencing unfair treatment and low wages, while scrap shoes are still being dumped and burnt in other sites, proving that the system is still plagued with problems.

Keady spent time in Indonesia living with a $1.25-a-day as a factory worker and said that it is not enough money to live on.  Many factory workers only have enough for two meals a day for just one person.

Because of the low wages in Indonesia it also creates a culture of corruption in the country, making Indonesia one of the most impoverished countries in the world.

“Sweatshops are practices that have gone global,” said Keady.

Because so many companies are now using sweatshops in order to make more money it is harder to avoid wearing clothes that don’t come from a sweatshop.

“The only way you will know that the clothing is not make in sweatshops is it says ‘union made,'” said Keady.

“I’m not going to be free advertisement for companies that exploit people,” said Keady.

Keady said that he hopes that in 15-20 years, companies will not use sweatshops anymore but he understands that it takes time.

Keady said that he will continue to work as an activist because he made a commitment with the workers and it is also grounded in his faith.

“There is enough injustice in the world that we can all campaign in and there will still be work to do,” said Keady.