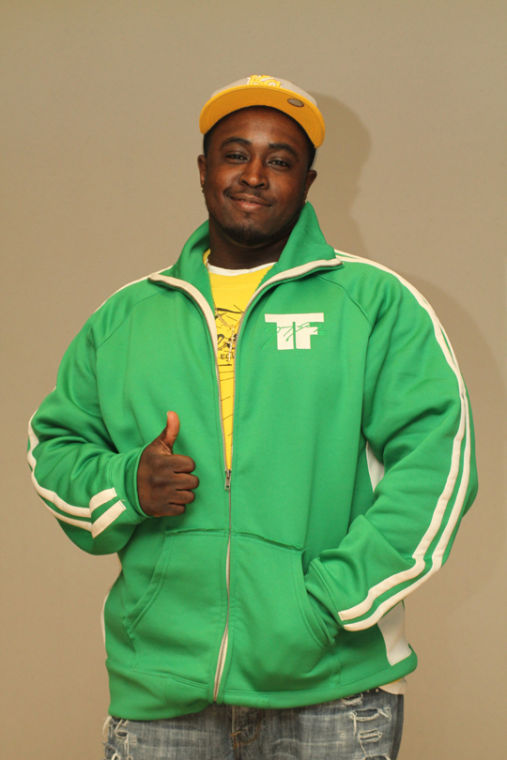 A dream come true Terry Dudley, Washburn student and founder of T.R.E.A.L. Fashions, has been designing his whole life. He wants to spread inspiration and empowerment through his clothing line.

Washburn business major Terry Dudley II has his own fashion line called T.R.E.A.L. Fashions (Tree-uhl) available in Topeka.  Together Risin’ Equally And Lovin’ it is the slogan as well as the meaning behind the entire line. Dudley wants to spread empowerment and inspiration along with the fashion he designs. Dudley said his main purpose is to “motivate and to turn the world into the most positive place I can, one T-shirt at a time.”

When Dudley was younger, he doodled on his jeans, shoes or even his coats. He was chosen out of the crowded halls at Topeka High, by the Topeka Capital-Journal to be asked what he thought of student uniforms because of his stylish apparel. He quickly said he wasn’t in favor of the idea because a student’s clothing is the only way they can express themselves while in high school.

“I have been designing all my life,” said Dudley. “I would write on my pants and on my shoes, no rhyme or reason, it was just something I did.”

Today, Dudley has his line available at two locations in Topeka, Center Stage at 606 Washburn Ave., and Exclusive Fashions at 420 S.E. 29 Street.  T.R.E.A.L. Fashions also has a Facebook page that you can view his clothing and buy it. Dudley has a website planned that should be up and running in the next two weeks to a month, to sell his pieces.  A special feature on his website will be a place for customers to upload photos of themselves in their gear, showing off that they support T.R.E.A.L. Fashions.  People viewing will be able to scroll through by state and see people from all over who have bought his clothing.  The website url will be www.TrealFashions.com.

“Everybody likes to see how involved you are,” said Dudley. “People can click on someone and say ‘Oh hey, I know her or him!'”

T.R.E.A.L. Fashions has also been involved in numerous fashions shows around Topeka.  When the Jet Ultralounge was open, Dudley had fashion shows there, as well as during  Juneteenth: Fun Day at the Park. Zumiez in the Westridge Mall had a fashion show and featured T.R.E.A.L. Fashions apparel. The label was also present at the KYEA: Kansas Youth Empowerment Academy for Young Adults with Physical and Mental Disabilities on June 12, 2010.

Right now Dudley is sponsoring the Sunflower State Games as well as the Spring Fever Golf Scramble on April 15.  He has also been invited to a fashion show in Crown Center on May 5, and will know more information in the near future.  Also, he plans on having a booth at the Farmer’s Market this spring.  To keep up on events and fashion shows, the up-and-coming website, and his Facebook page will have more information as it becomes available.

Sometimes, Dudley sells his apparel out of the trunk of his car.  People from all over the U.S. are wearing his clothing line right now. The prices are reasonable at $20 for small to extra large, and as the sizes go up so does the price, and goes 3X and up at $25. So far apparel includes T-shirts, jackets, hats, and some jeans, hoodies, bags, and totes.   Baby and toddler sizes are also available, because Dudley doesn’t want anyone left out.

“I wanna give back, I know I can’t save the world but I know I can make it better.” Dudley said. “A simple smile can go a long way.”