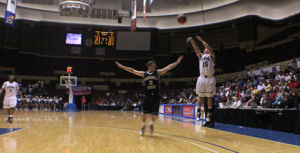 Washburn came into the MIAA conference tournament looking to play well and advance themselves into the national tournament. That plan now takes a backseat to hoping that other teams in the region fall unexpectedly as Washburn lost Thursday night to Emporia State 67-61.

The game featured a combined 43 personal fouls between the two teams. With no chance for either team to get any kind of rhythm going, the game quickly degenerated into a physical game that took its toll on the Ichabods.

“[Logan Stutz] got two free throws and four touch fouls so it wasn’t a great night, so I felt sorry for him,” said Bob Chipman, Washburn head basketball coach. “I spent most of my time officiating than coaching, which I know better.”

The physical nature of the game showed in the first half especially as Emporia State shot 12-23 from the floor, getting a great deal of their points from the lane. ESU’s ability to get into the lane allowed them to draw fouls early and often from Washburn as they also went 9-14 from the free throw line. In part, Emporia State’s ability to take advantage of the Ichabods was also a result of key players like Stutz having to deal with injuries coming into the tournament.

“Yah it was frustrating,” said Stutz. “No excuses, I hadn’t been on the floor much this last week and it showed.”

Washburn responded throughout the first half with the attacks outside. Despite early foul trouble to some of their front court players the Ichabods answered with a barrage from outside, shooting 5-10 in the first half from three-point range, including 2-3 shooting from outside by De’Andre Washington, forward.

Going into the locker room at halftime trailing just one point, Washburn came into the second half hoping to get some momentum going. Washburn came out early shooting well and getting to the loose balls.

Taking an early second half lead, Washburn continued to struggle through a tightly whistled game by the officials. Halfway through the second period Emporia State seemed to find Ichabods disoriented by the Hornet defense.

“We had some weird groups out there and just looked out of sync,” said Chipman. “[Emporia State] did a great job down in the low post and that seemed to disrupt us.”

As the clock ticked down, Washburn slowly fell behind as Emporia State closed out the game at the free throw line hitting key foul shots to finish up the game 67-61

Washburn was led in scoring by Jeff Reid with 11 points and four other players who tied for 10 points a piece.

Washburn finished the regular season with a record of 18-9. On selection Sunday, the Ichabods were selected as the No. 7 seed in the South Central Region Tournament. The Ichabods will face No. 2 Missouri Southern State University on Saturday at 2:30 p.m. in Edmond, Okla. The two teams met twice this season and each team won on their home court. This is the Ichabods first NCAA tournament appearance since the 2004-2005 season.