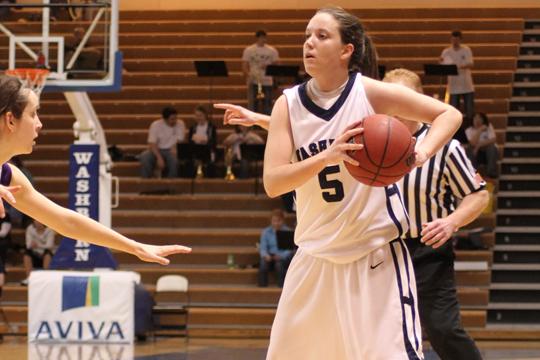 Coming into tonights game against Missouri Western State University, the Lady Blues were looking to get their first taste of MIAA conference tournament basketball. The Lady Griffons came out on fire after giving up the early lead they would go on a 6-0 run early in the first half to go up 9-3. Part of the quick start could be attributed to the Lady Blues.

“I don’t know if we didn’t shoot it well or if we were just nervous for the game because it was the two [seed] versus the seven,” said Ron McHenry, Lady Blues head coach. “Sometimes that can have an effect because you got a group out there that hasn’t been around that long.”

Having replaced many of the previous season’s players due to graduation it was a question coming into the game where they would get their offense from. In the first half Laura Kinderknecht, sophomore guard, would find the ball in her hands often as she would score 12 points to pace Washburn early and finish the game with 13.

Alyssa Mullen, senior forward would put in 13 points in the game while crashing the boards for 14 rebounds for a double-double.

“We didn’t have a lot going on with Cassie [Lombardino] and she was getting frustrated so we had to figure out some other way to score,” said Mullin. “I just had to go out there and play hard for my team, this is my last year and I only have a limited amount of games left.”

Washburn would recover and take the lead with roughly 11 minutes left to go in the game 40-39. The Lady Blues would would go back and forth with the Lady Griffons throughout the rest of the half until, with less than three minutes left to play, Washburn would get a clutch three point shot from Mullin to seal the victory that would eventually end 58-55.

Washburn moves to 22-5 on the year and awaits the winner of the Emporia State Lady Hornets vs. University of Central Missouri Jennies. The semi-finals will be played Saturday 8:15 p.m. at Kansas City Municipal Arena.