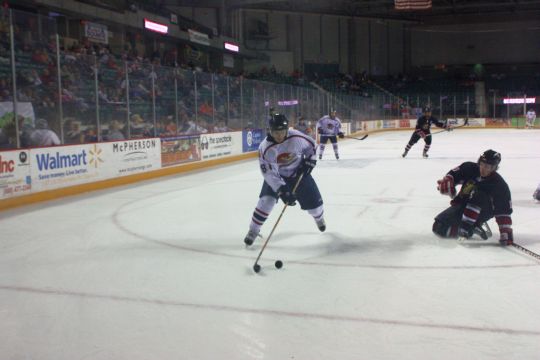 Nate Milam attempts to get a shot on goal Friday night. He had a goal and an assist in the contest, as Topeka defeated Wichita Falls 4-3

It wasn’t quite the cakewalk the night before was for the Topeka RoadRunners on Friday night, but at this point in the season, they’ll take the victory any way it comes

A night after knocking off the Wichita Falls Wildcats 5-0, Topeka (39-9-3) held on for a come from behind 4-3 victory on Friday. With a subpar effort to open the contest, Topeka head coach Scott Langer was glad to see his team respond strong the rest of the game.

“It was a very uninterested effort in that first period,” said Langer. “But our guys regrouped after that first 20 minutes and you look at the shot and chance chart, and we were all over them in the second period, which gave us the opportunity to win the hockey game.”

Looking to make up for a shutout the night before, Wichita Falls struck first halfway through the first period. On the powerplay, Mikhail Sentyurin knocked an opportune rebound past Eric Rohrkemper as the Wildcats were able to take a 1-0 lead at 10:18. Jason McAloon then put the puck into an open net on a rebound at 18:40 to give the Wildcats a 2-0 advantage.

Topeka made sure to make up for the first period goals in the second period.  An early goal just 40 seconds into the period from Justin Hussar made it 2-1. It was Hussar’s 30th goal of the season.

Nate Milam then poked home a rebound during a scrum in front of the net at 10:14 to tie the game. On the powerplay, Cory Ramsey redirected a Nate Milam shot at 15:07 to put the RoadRunners on top going into the third period.

Zach Schrotenboer took advantage of an opportunity off a pass from Trevor Campbell at 3:45 of the third period to put Topeka up 4-2.

“Campbell joined the rush — he was doing that all game and it really helped us spring some offense,” said Schrotenboer. “I kind of went to the center of the ice and he drove wide right and fed one right through the defenseman’s stick. I had a wide open shot and it went right through the goalie’s legs.”

Before they had even scored a goal, Schrotenboer knew Topeka wouldn’t just give in after giving up two first period goals.

“We’ve played so many games against tough teams and we’ve kind of built that confidence up,” he said. “We know we’re never really out of a game. We just know that we have to stick to our game plan and that we can always come back and put it on teams. It’s nice to have the confidence in the locker room.”

Wichita Falls (22-24-4) was able to cut the lead to 4-3 on a one-timer by Ryan Frost at 13:55, but Rohrkemper was able to hold off the Wildcats over the final few minutes for the victory.

Topeka forward Ryan White was injured in the second period on a slash to the knee. He did not return in the contest but his injury is not expected to be serious.

With the victory, Topeka is now 20-1-1 since the New Year began. They will travel on the road to face the Wildcats again on Friday night before travelling to Amarillo, Tex. to face the Bulls on Saturday and Sunday.

Amarillo sits in second place in the North American Hockey League South Division and is 12 points behind Topeka, with the Bulls currently holding three games in hand.