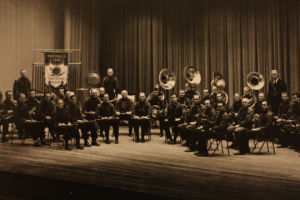 The Marshall’s Band has been a band in Topeka since the 1883-1884 presidential election, and is the oldest band in Topeka.  John Bromell Marshall organized the band after he was asked  to promote the Republican candidates for President and Vice President, James G. Blaine and John A. Logan. When the Republicans lost the election, the band members figured their careers together were finished.  J.B. Marshall is quoted as saying, “Boys, it’s all over and Marshall’s Band dies with the election!”

Much to band members’ surprise they were asked to play for the winning Democratic party. Marshall, being the strong Republican he was at heart, quoted an extremely high price hoping to scare them off.  The Democrats surprised Marshall and his band again by actually paying the price and asking them to play. After that it wasn’t long before other organizations and venues wanted Marshall’s Band to play for them.

Today, the band sticks to shows within the city of Topeka, but in their early days it would travel all over the United States. The band always received rave reviews and promoted Topeka to people all over.

Marshall began his life and career in England, in Queen Victoria’s Guard Band as a cornetist, and later traveled to the United States.  In Topeka, he served as Register of Deeds, before he started the First Ward Republican Flambeau Club Band which was later called Marshall’s Military Band, or Marshall’s Band because of the popularity of Marshall himself.

The band, hoping to raise money and obtain a steady income so it could keep playing, bought Garfield Park from John R. Mulvane in 1901. The band needed uniforms, equipment, and means to move the band around the country.  Hopes of fixing up the park were destroyed by the flood in 1903 which devastated Garfield Park.  Marshall tried to resign early because of this, with a letter to the rest of the members who rejected it immediately. Even so, the Marshall Band continued playing wherever it was asked, rarely being paid and when they were, not much.  Mostly the band played for special occasions and in public parks. Marshall was director of the Band until his death in 1910.

Today, the band calls itself the Marshall’s Civic Band and plays here in Topeka during June and July.  They play at 7 p.m. June 12 in Gage Park Amphitheater, and two other shows throughout the following weeks. To check the schedule, history and to find more information about the Marshall’s Band their website is skyways.lib.ks.us/orgs/mcb.