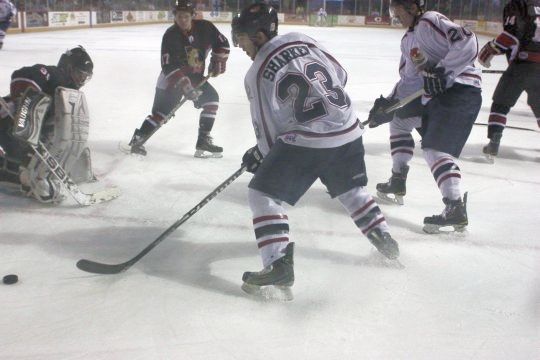 Kyle Sharkey grabs a loose puck as he tries to get a shot past Matt Green during a regular season game between Topeka and Wichita Falls. The two teams battle tonight at 7 05 p.m.

The Topeka RoadRunners held control of their Thursday contest from an early standpoint. Twelve seconds into the contest to be exact.

Brian Christie scored for Topeka (38-9-3) within the first minute of the contest, giving the RoadRunners early control as they went on to defeat the Wichita Falls Wildcats 5-0.

Topeka head coach Scott Langer said the early momentum was a key for the team and that he saw it even before the game began.

“We were really excited in the last two days of practice to be in our locker room, on our ice and not traveling,” said Langer. “We just keyed on that and wanted to continue that energy and excitement in the first period. I thought we had a really good first period, which really put them on their heels. “

The game, due to $2 tickets, also had an announced attendance of 2,885, which made the weeknight game feel more like a weekend game. Christie said that also helped Topeka grab momentum throughout the contest.

“Everyone was excited to get back here after a month on the road and I think the fans we’re excited to see us,” said Christie. “It was a good atmosphere tonight. I liked it a lot.”

Justin Hussar added to the Topeka lead at the 10:13 mark to increase the lead to 2-0. The RoadRunners outshot the Wildcats 13-4 in the opening frame.

During a relatively tame second period, Michael Hill put another goal behind Wildcat goalie Matt Green to make it a 3-0 game at the 13:33 mark.

In the third period, the RoadRunners made sure Wichita Falls (22-23-4) wouldn’t claw back into the game with a goal from Nate Milam at the 1:31 mark. Just under than ten minutes later, at 11:11, Hill slapped a one-timer past Green to increase the lead to 5-0.

Rasmus Tirronen stopped the 19 shots he faced in a winning effort as Green stopped 33 of 38 shots in the contest.