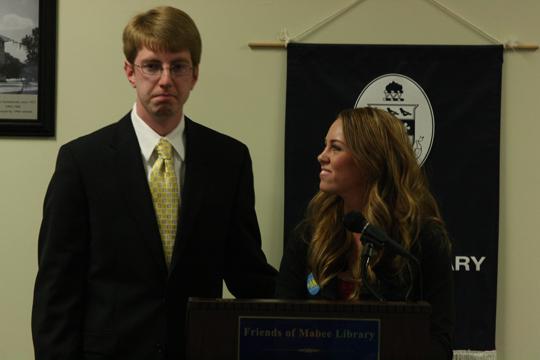 Campaigning is more than going door-to-door and handing out fliers. It involves, among other things, a grand marketing plan.

Taylor McGown, who is running with vice presidential candidate Michael Kitowski, has worked with the last two Washburn Student Government Association president’s campaigns and knew coming in how much work it would take.

“I knew what to expect,” said McGown. “Even as just a volunteer, I know I had a lot of outside responsibility and a lot of questions coming at me being a volunteer and not actually being a candidate.”

As campaigning began, McGown found that having an eye-catching poster would be a strong first step. Jessie McGown, Washburn freshman and her sister, was able to develop an idea with her campaign’s assistance. Their final trademark “MK” was a result of these brainstorms.

“We wanted to make something easy enough that we could put it on every single poster, every button, and just everything we put all over campus,” said Taylor. “And we hoped that would bring people to automatically associate that [MK] with our campaign.”

The colors, blue and yellow, were an attempt to use a new color scheme. Taylor mentioned that Washburn’s colors used to include yellow.

Since designing their posters, sticking with their slogan, McGown, Kitowski and their campaign team attempted to connect with students. With different members of the campaign approaching different student populations’ attention, they attempted to target the athletic teams, Greek life, and on-campus living populations.

However, they are also looking to attract attention in the Memorial Union and classrooms this week. Furthermore, attributing that Facebook “spamming” an entire month may begin to agitate students, they attempted to hold off until it became crunch time.

“Our main goal was these last two weeks to definitely hit it hard and make sure it’s all out this last week,” said Taylor. “We don’t want people to hide our updates because we’re always talking about the campaign. I think that’s one thing we do with WSGA is wait until the week of and then cram it on people.”

The group also plans to put messages for their campaign on their vehicles, which they hope will be a new tactic to attract students at the university. One idea the group had was for t-shirts, but according to WSGA rules, that is not an allowed way to campaign, so the group could not continue with this idea.

“Even though Rizki and Nic are probably running a great campaign, it’s not our focus,” said McGown. “Even though they might have great things, we picked three things on our platform because we believed they were the most important things on Washburn. We don’t need to put negative energy on them. That’s not what this is about.”

As they actively campaign and market, candidates still live the lives of average students, partaking in classes and extracurricular activities. It all becomes a balancing act.

“I still have tests and I still have homework and all that, but I can’t just get it done ahead of time so I don’t have to do it later,” said McGown. “It’s kind of a barrier. But, for the most part, we’ve adjusted our schedules to the best of our ability so that we can talk last minute to all those different organizations, groups, classrooms and students we haven’t already reached.”

McGown, though, has found that there are certain tactics that keep campaigning from becoming overly stressful in the midst of other obligations.

“We just remind each other to enjoy it,” said McGown. “Because if you aren’t enjoying it, then why are you doing it? Of course, it gets a little bit ‘we’ve got to do this again,’ but it’s what we’re passionate about and it’s what we want to do. So it’s exciting and we’re still happy to be doing it.”

As the voting begins, the change in lifestyle over the last month will slowly begin to fade its way back to life prior to campaigning.

“It’ll be nice to not be constantly asking ‘hey, have these people voted?’ and getting to return my Facebook to my own instead of Michael’s and mine,” said McGown. “But after announcements, whatever happens, I’m just going to try to take a couple of days to myself. You kind of need that time to regroup.”