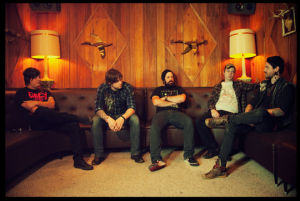 The late Marilyn Monroe is not often associated with heavy metal music, but attendees of Lawrence’s Bottleneck bar found the connection as the Explosions II Tour hit town with the bands the Almighty Norma Jean, taken from the actress’s birth name, as well as special guests Of Legends, Impending Doom, Stick to Your Guns, and local opener the Runaway Sons.

The Atlanta-based band formed as Luti-Kriss in 1997 before changing its name to avoid confusion with rapper Ludacris.  After their first album “Bless the Martyr and Kiss the Child,” original vocalist Josh Scogin left the band, leading Brandan to join.

“We were friends for a long time just through different bands I was in,” said Brandan.  “We played shows together in their old band and stuff.  When [Scogin] left, they asked me to join, simple as that.

As is common in the music industry, Norma Jean has gone through different line-ups, but the core being has remained the same.

“We’ve all been doing this since 2005,” said Brandan.  “The band always transforms.  We have no loyalties to anything, music, the name of the band, or anything.  We’ve always been that way.”

While the band is always changing and developing, Norma Jean does have a very strong opinion that will not be dismissed.

“T-rex is the best dinosaur, and everybody knows it,” said Brandan.

When not touring or making new music with Norma Jean, Brandan has side projects to occupy his time, one being his design Unwork art projects as seen on merchandise for his band and others.

“It’s just graphic design,” said Brandan.  “I don’t really take it seriously.  It’s something to do when I’m home, keep me busy.  If someone hits me up, I’m down to do it.  I’ll do anything.  I’ll do anything twice.”

Apart from Norma Jean and graphic design, Brandan also sings and plays guitar in Fear is the Driving Force with his brother and describes how the bands are different.

While Brandan enjoys Unwork and Fear is the Driving Force, he sees Norma Jean as his top priority.

“The other stuff is just for fun,” said Brandan.  “It’s side stuff to do at home.  My brother plays in that band, so it’s something we get to do together when I’m home just to chill out and play music.”