Bandits hold on for victory from RoadRunners 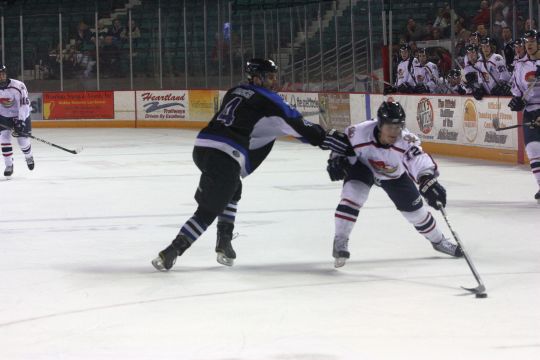 A hold up Ryan White attempts to move through the offensive zone on Friday night while fighting through a hold by Russell Finch. White and the RoadRunners couldn't mount a comeback late in the game as they fell 3-2.

Topeka (42-10-3) came alive in the third period after trailing 3-0 going into the period, however it wasn’t enough as they fell 3-2 to break their 10-game winning streak.

Their lines had to go through shuffling after injuries forced Michael Hill, Andrew O’Leary and Joe Van Antwerp to miss the contest. Topeka head coach Scott Langer said this gave his team some problems.

“We’ve got a lot of moving pieces right now and guys are playing some different spots, but we have some depth and we should’ve at least been able to find a way,” said Langer. “We just were not very good in the first two periods, and (the Bandits) played really solid, sound defensive hockey. They came here to play and we didn’t.”

In the first period, Isak Quakenbush scored on a fluky shot at 12:12 to give the Bandits the advantage. The first period ended without another goal, as both teams struggled to get quality shots on goal.

Two late goals in the second period put the RoadRunners in a tough situation. At 15:09, Chris Ciotti scored a shorthanded goal after a Topeka turnover. Joe Kasilz put a shot behind Eric Rohrkemper at 18:14. Rasmus Tirronen was brought in to relieve Rohrkemper following Kasilz’s goal. The shots were 15-10 St. Louis following two periods of play.

After only mustering 10 shots in the first two periods, the RoadRunners peppered Matt Green with nine shots in the final frame. A Justin Hussar backhander put Topeka on the board at 7:12 and Bob Marx was able to slip a shot from the blue line past Green at 13:38, but the RoadRunners couldn’t find the back of the net down the stretch to tie the contest.

“The good thing is our guys battled in the third,” said Langer “I think if we would have had that energy level the whole game it would’ve been a different story. It’s a big learning lesson. You have to play 60 minutes to be able to beat that hockey team.”

Topeka returns to action tonight to face the Bandits at 7:05 p.m.