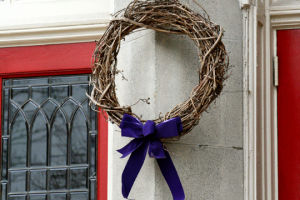 Every year, millions of Christians around the world give up something for Lent, known as a time for reflection and preparation for Easter.

After Ash Wednesday, people make promises for 40 days by abstaining from something that simply is a type of pleasure. It could range from giving up candy to giving up Facebook.

This year Gabriela Berumen, sophomore, gave up soft drinks and chocolate because they are two of her favorite snacks. Berumen believes that by giving up something is a way to self-improve yourself.

“I also think that is a little taste of what God gave for us, is a sacrifice we chose to do,” said Berumen. “If God gave up his life for us then by giving up something is a little reminder of what he did.”

“I think it’s important to stick with what I started and is also a way to keep following away from something,” said Haverkamp.

Others are trying something new; Haverkamp said that today giving up something is half self-improvements, half faith.

JoVaughn Anderson and five other friends decided to do something new this year.  After hearing the “Love Dare” on the radio, Anderson talked her friends into doing it for 40 days.

“There is a book and they also make a movie about it, “Fire Proof” it helps strengths your relationship with someone,” said Anderson. “Everyone can do it, not just you and your significant other.”

Anderson said that it is more like an inspirational book. The book gives the reader a challenge to do every day.

Anderson also said that with the Love Dare you focus more in God.

“It’s not like you are giving up something just for no reason, it has a meaning behind it,” said Anderson. “It helps view our relationship in a better perspective.”

Anderson and her friends made a Facebook page where they talk about their experiences with the challenge.

“One of the bad things is that it is very time consuming, but at the end I know it will be all worth it,” said Anderson.

Anderson said that this is a different way that you can improve yourself and your relationship. It is also a way to get closer to God. She also said that she believes many people say negative things about themselves and that it is a hard habit to give up.

“I think that once I’m done with this challenge I’m just not going to try to say so many negative things all the time,” said Anderson.