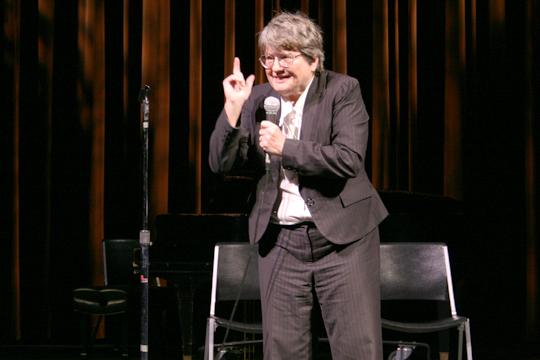 Not in our name Sister Helen Prejean gives an impassioned speech against the death penalty. Prejean is the author of “Dead Man Walking.”

Bestselling author and anti-death penalty advocate Sister Helen Prejean visited Washburn on Thursday for a reading of “Dead Man Walking,” a play based on her book of the same name. Theatre students read excerpts from the play to the audience. A discussion on capitol punishment followed the reading.

Prejean served as spiritual advisor to inmates condemned to death for their crimes. “Dead Man Walking” follows her journey with those men and describes the complex emotional conflict surrounding capital punishment.

“What the play is about, is to take you deeply into your own heart and face the ambivalence that we have to work through on this issue,” said Prejean. “It’s usually not a slam dunk thing with most of us; that we shouldn’t have the death penalty or I’m against the death penalty. We have to go through and look at it at the pain on both sides.”

After the reading, audience members were invited to ask questions and give thoughts on aspects of the death penalty process.  Attendees asked how it could be seen as cruel to sentence someone to the death when they have committed terrible acts, and if it was more economical to execute a criminal who would otherwise be taking up space in prison. Other audience members shared personal stories of being a juror on a murder trial and being the family of a murder victim.

Event organizers were excited by the discussions generated from the event.

Kansas is one of 35 states that currently allow the death penalty although it has not been used since 1965. Ten inmates in the state are currently on death row, the costs of which are 70 percent higher than the cost of non-death row inmates. This provides a strong economic motivation for changing Kansas law, according to the KSCADP.