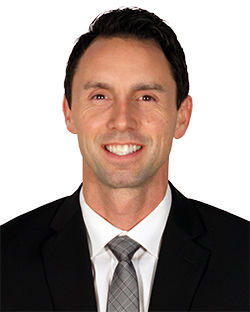 Brett Ballard: Coach Ballard realizes his players are at Washburn University to receive an education. Ballard knows that developing good relationships with his players off the court will translate to their performance on the court.

Do Not Publish Waiting on second source.

Head basketball coach Brett Ballard enjoys coaching from the sideline but finds the most enjoyment out of developing relationships with his players off the court.

Ballard has been coaching since 2003 and has coached at Washburn University for two years. Ballard has experience from multiple colleges as a men’s basketball coach.

“I originally went to Hutchinson Community College right out of high school. Then I transferred to the University of Kansas,” said Ballard.

The accomplishment he likes to mention most is marrying his wife Kelly and raising their three kids. Ballard loves his family, coaching and helping athletes grow.

He enjoys seeing young people grow and helping them along their journey in life. He also values the relationships with the players.

Multitasking is a major part of Ballard’s job when considering all the players he keeps tabs on. His passion is getting to know his players and recruiting upcoming talent. Having much experience in different sports helps Ballard to be more efficient as a recruiting specialist.

“I love recruiting guys that have played multiple sports in high school,” said Ballard. “I think it’s beneficial for guys to have played different sports and learn different skill sets.”

Basketball is important to his players, although he is aware that they have prior commitments. Academics come first before basketball. Ballard says that he knows his players are here for a good education. Students have to be good with time management and balance their schedule.

Ballard focuses on his team year-round. He is always looking for new players who have great potential so that he can help them become better players.

“There isn’t much of an off season because recruiting is a big priority throughout the course of the year, and we’re always looking for new recruits to roll in,” said Ballard.