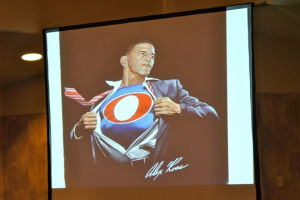 Jewett’s presentation entitled “Jesus, Captain America, and Barack Obama: The Superhero Myth in Contemporary America”, was given as the 30th annual Thomas King lecture in Religious Studies hosted by the Washburn Department of Philosophy.

Jewett has written several books on the New Testament, and on the dangers of religious nationalism, including his recent book: “Mission and Menace: Four Centuries of Religious Zeal in America”.

Among many other things, Jewett’s lecture addressed the modern super-heroic fantasy, and how it has affected the way some Americans identify with religion.

He mentioned the Mel Gibson film, “The Passion of the Christ”, and it’s depiction of Jesus Christ, as an example of the “super-heroic fantasy pattern bleeding out into religion.”

“Like the grim face of the tortured Christ in the Mel Gibson film, the audience knows that the superhero will return as an avenger; he will get them. This identity is naively nationalistic, following the path of the superhero extreme of pop culture.”

Jewett also suggested that some Americans have begun to view their politicians as super-heroes; vigilantes who circumvent the due process of government, and are able to use superpowers to repair the country in a way that mere democracy never could. He said that, since no one can live up to these expectations, Americans are losing faith in democracy.

Later, Jewett emphasized that throughout history, the rise and fall of empires has proven time and again, “no nation is really super”; that every country and every person has limitations. America cannot always win, regardless of who is in command.

“The super-heroic fantasy disguises the moral equation with the promise of always winning and having no limits,” said Jewett. “It deludes us into thinking that violence against alleged sources of evil will always succeed if the right superhero is in charge.”

Jewett argued that classical myths were designed to encourage children to become more responsible for their actions, and to understand how their actions affect the world around them.

He added that none of the characters in modern super-heroic stories become more mature; that the stories mislead people into thinking that power and understanding are inherent, and that with these traits come the promise of success.

“Superman and Wonder-woman provide no encouragement to engage in the long slow process of education, of learning from our failures, of coming to terms with our limitations, and discovering new ways of cooperating with others.”

Jewett said it is useless to attack super-heroic myths directly, or to attempt to ban them.

“Discussing the flaws of comic book story in a nonthreatening manner is the best method to cope.”

Philosophy professor, Barry Crawford was the head organizer of this years lecture with the help of others from his department.

Crawford suggested that students take interest in the King Lecture because, “Here they have an opportunity, for no expense, to hear these scholars and talk about their work.”