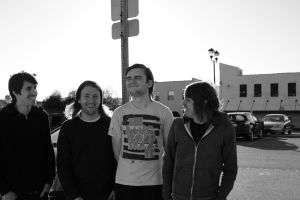 A Sequence of Ghosts (ASOG) has less than a year’s experience, but is proving it is a force to be reckoned with.

The band, whose Facebook page describes its music as hardcore, ambient and Christian combines gritty screamed vocals with melodic and atmospheric guitar work. Listeners may be able to hear sounds of early Oceana and Decoder when they give their first EP a spin.

Members Will Steffen and Zane Callister, who play drums and guitar respectively, know the band has a wide musical taste but says they do draw from specific bands.

“We love every genre of music and listen to just about everything on a day to day basis,” the band said collectively. “As far as our true inspiration in this band goes, I would say we take a lot from bands like Life in Your Way and other spiritually motivated bands.”

The band member’s also said their faith plays an important part in the band but isn’t all they focus on when they perform.

“Worshiping God isn’t our excuse to play in a band, it’s our motivation,” said Steffen. “So yeah, I’d say our Facebook is pretty spot on. Were passionate about people and our music and we want to use that to bring everything we love to one place.”

While living in the Kansas City area, the band formed in April, 2010 and released their first EP, which was self-titled, in May, 2010. While it only consisted of three songs, ASOG was able to make enough impact to tour much of the United States since its release and has upcoming shows which include performing with The Color Morale, Emery, and To Speak of Wolves.

The band’s show in Wichita with The Color Morale on March 7 is followed quickly by their show in Kansas City with Emery on March 10. The Color Morale will be releasing its new album on March 8, so ASOG will likely develop a relatively strong, new fan base because of the show.

But the band knows they have to just go out and play and focus less on the size of the audience.

“We’re all super psyched to be playing larger shows but honestly, we’re going to treat a crowd of 300 the same as a crowd of five,” said Steffen. “Don’t get me wrong, playing huge shows is awesome and a huge blessing, and it’s awesome to play with bands we all grew up on like Emery, but one fan is just as important as 300.”

The band recently finished a tour with Harp and Lyre, another rising band, with one of its dates bringing them to Salina, Kan., where ASOG played at the Indian Rock Lodge.

ASOG also had the opportunity to record a new five-track EP in February with producer Shane Frisby, who has also worked with The Ghost Inside and Bury Your Dead.

Working with a producer of that caliber helped the band work on their sound, according to Steffen.

“In my opinion we’ve matured as a band and really found our sound,” said Steffen. “There’s a lot more energy and drive on this EP compared to the last one.”

Ultimately, with their presence being seen in such a short time, the band has quickly realized how lucky they already are.

“Our loyalty is to the people who give us a chance,” said Steffen. “We owe them so much for all of the support we’ve already gotten as such a young band.”