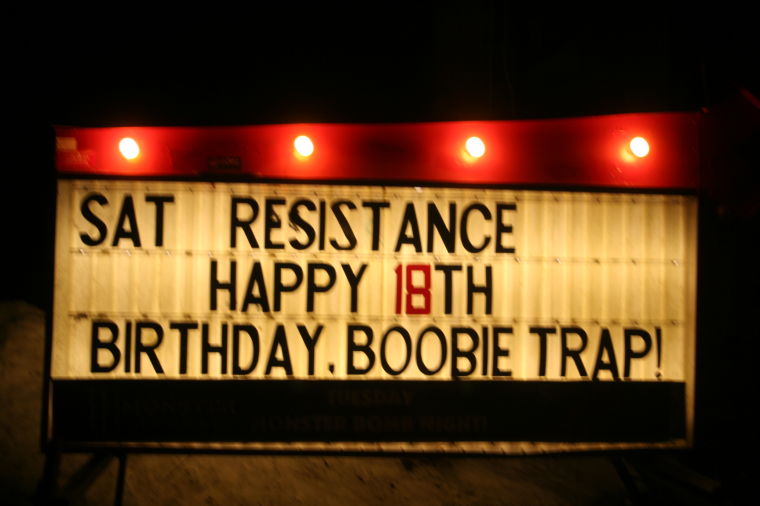 Happy 18th The Boobie Trap, 6th and Washburn, has been a staple in the local music scene. Owner Brian Chambers hopes to make his bar a positive place for musicians.

The Boobie Trap Bar, located at Sixth Avenue and Washburn Avenue, is a staple in the Topeka local music scene. The bar recently celebrated its 18th year of being in business.

The Boobie Trap, which is owned by Topeka resident Brian Chambers, celebrated their 18th anniversary on Saturday Feb. 19.

“We’ve got the Resistance Dance Party show, which is normally on Thursdays,” said Chris Chestnut, doorman. “There are live DJs, dancers and people having a good time hanging out.”

There was also a large banner along the hallway where patrons could write their congratulations or other messages to Chambers. Chambers runs the bar with his wife of nine years, DawnMarie Chambers.

“It was owned by Brian’s father before he took over,” said DawnMarie Chambers. “When I came on the scene in 1997, we were doing a lot of karaoke and a lot of theme parties. We also did dollar Sunday nights. I had never bartended before in my life. I learned really quick and how to do it really fast.”

The bar began showcasing live bands in 2003 and 2004. DawnMarie Chambers says she is interested in finding a way to incorporate a possible starving artist show to help promote local art as well.

“It’s a great, friendly atmosphere and a good music scene,” said Chestnut. “You always have people getting together trying to get different music or promotions going, benefit concerts and great times.”

The Boobie Trap Bar has a website on which Chambers has posted a “rockumentary,” which talks about the bar. On the video, he says the name of the bar came from a truck driver who came in. He also talks about being a musician before owning the bar and how that influenced him.

“One of the focuses for me has been on the lives of the kids as musicians, as well as the kids who come in,” said Chambers. “I work hard to make this go, along with a lot of other people; all the bands and the fans who come out, and this makes me proud.”

Washburn alumnus Michael Gilmore, who graduated in 2008 with a degree in French, has been frequenting the Boobie Trap for about five years.

Brian Chambers is aware of the negative view the bar business can receive and tries to change this by making his bar a positive place for young musicians and young people in general.

“I hope that I’ve had a positive impact,” said Brian Chambers. “A lot of people look at the bar business in a bad way and I’ve tried to keep it in a positive way. I’m proud of what we do here.”

For more information on the bar and upcoming events, as well as to watch Chambers video, go to www.boobietrapbar.com.