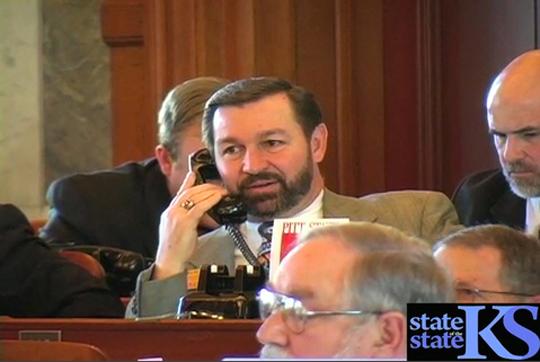 In a State house committee Monday, Representative Virgil Peck (R) suggested illegal immigrants should be treated the same way the state controls feral pigs, by shooting at the from helicopters.

Peck said, “It looks to me if shooting these immigrating feral hogs works maybe we have found a problem for our illegal immigration problem.”

When initially questioned about his comments, Peck told a reporter from the Lawrence Journal World that he was joking and that he was just speaking like a person from Southeast Kansas.

State of the State KS tried to interview Representative Peck on Tuesday but he declined. Instead, he handed our reporter a statement that read, “My statements yesterday were regrettable. Please accept my apology.”

The statement said in part, “We have visited and counseled with Representative Peck about the matter and have accepted his sincere apology for the inappropriate remark,which, although made in jest, was not thereby made any less offensive.His acknowledgment of his error, his apology to the public and his House colleagues and his pledge to be more vigilant and respectful in his discourse is appreciated and accepted.”

“It sends the message of fear and hatred. Be on guard and look out for what’s coming down with the immigration bills, you’re not welcome here,” said Ruiz.

Representative Peck’s comments come at a time when the state legislature is considering a number of bills that target illegal immigrants.

In other State house news, a Senate committee debated a bill that would ban public sector unions from taking a voluntary deduction from an employee’s paycheck for political activity.

“I am highly offended with this bill, I think it is a waste of time,” said Senator Jean Schodorf (R).

Opponents of the bill said the bill was rushed through the committee and will limit free speech but supporters say the purpose of the bill is to prevent union members from being coerced into making a donation.

After a heated debate, the bill passed out of committee but will face scrutiny in a second Senate committee later this week.