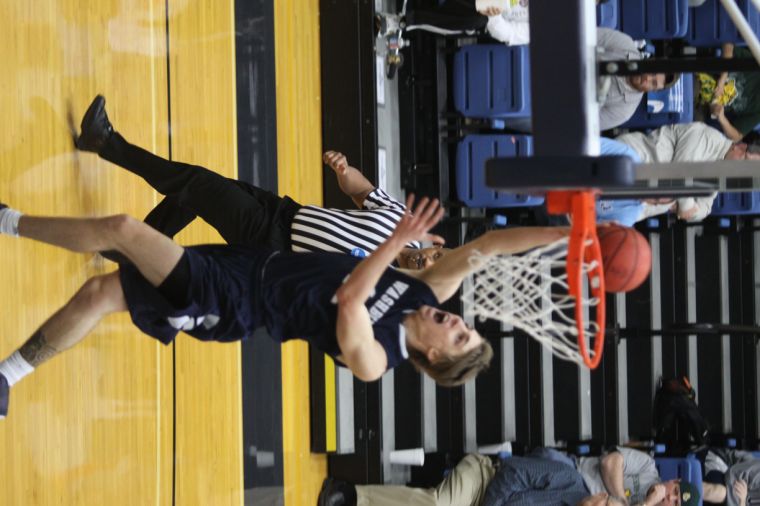 Heartbreak Washburn’s Logan Stutz, senior forward, goes up for a scores on a layup against Missouri Southern State University on Saturday in the first round of the NCAA tornament. The Ichabods lost in overtime to the No. 9 Lions after sending the game to overtime with a buzzer beating shot. Photo courtesy of Gene Cassell, Sports Information.

As John Steinbeck once famously wrote, “Now is the winter of our discontent.” In a season that began in the winter months, to have it end so chillingly on the verge of spring can seem cruel.

Washburn men’s and women’s basketball both ended their season last weekend in dramatic fashion. With one team losing on a controversial replay review, and the other losing in overtime on a banked three-point shot. With the way the season ended, both teams still managed to find the positive in the season that passed.

In the case of the men’s team, the Ichabods came into the postseason having played well at the end of the regular season only to see their rivals, Emporia State put an end to their conference tournament run. But with the NCAA tournament in their radar, Washburn’s veteran leaders reaimed their focus towards their next opponent.

The Ichabods made their first appearance in the NCAA Tournament since the 2004-2005 season facing No. 9 Missouri Southern State University for the third time this season after splitting the first two games. The game went back and forth the entire game and Washburn trailed 70-67 with four seconds remaining in the game. De’Andre Washington tied the game with a three-pointer at the buzzer to push the game to overtime. In overtime, the Ichabods led by three points with 45 seconds remaining but only managed to score one more point. Southern banked in a three-pointer for the lead and never looked back.

Logan Stutz, a senior forward and first team all-region selection, finished with 28 points and 13 rebounds, giving him seven double-doubles for the season and nine in his Washburn career.  Washington finished with 20 points and 12 rebounds. Even after the game was over, the team still walked away proud of their season accomplishments.

“I felt like we could beat anybody at any time,” said Logan Stutz, senior forward. “We just played one of the best teams in the country, and we beat them before, so we having nothing to be ashamed of.”

Looking forward, the men’s team will have to replace five seniors including Stutz and De’Andre Washington, senior forward both of which were indispensible pieces of the team’s success.

The Lady Blues in contrast, came into the season with uncertain expectations. Having replaced many of the starters from the previous season, Washburn looked to grow as the season went on. Going into the postseason, a surprising second place finish in the conference gave way to a run to the MIAA conference tournament semifinals before running into rival Emporia State, who ended their tournament aspirations.

Going into the postseason, the Lady Blues looked to get off to a strong start against Central Oklahoma University. The game would be a back and forth battle as both teams exchanged the lead throughout the contest. Washburn finally took the lead away late. With less than five seconds left to go, UCO took the lead back 65-64. With time expiring, Laura Kinderknecht was fouled on her way to the basket but after a lengthy review, it was determined that the foul was called after time had expired and the Lady Blue’s season ended in controversy.

“It’s disappointing because this team has come a long way and done a lot of nice things,” said Ron McHenry head basketball coach. “You hate for it to end with a group you like to be with and coach.”

The Lady Blues were lead by Stevi Schultz, junior guard, with 16 points and 11 rebounds and Alyssa Mullen, senior forward, with eight points and 10 rebounds.

Moving forward, the Lady Blues will lose Alyssa Mullen and Rachel Boling, both seniors, but will return most of the team that finished a surprising second in the conference. With other players returning from injury, Washburn will look towards next year with a positive outlook.