Give my regards to Topeka Theatre 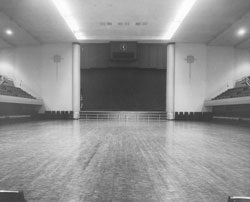 While New York City has Broadway and Chicago has the Theatre District, so too has Topeka enjoyed a rich tradition of the performing arts.

When Topeka was founded in 1854, the original founders of the city believed in a strong arts community as a pillar of the city. Denizens of the city would perform various plays in some of the local watering holes and traveling troupes came through the capital city as early as 1868.

In 1880, Lester Crawford purchased the old Costa Theater, which stood where the Commerce Bank building is today, and renamed it the Crawford Opera house. Just 90 days after its opening, the building burned in what the Topeka Capital Newspaper would term, “a fiendish act of destruction.”

“They never were able to find out what happened then,” said Doug Wallace, local historian. “Most, though, suspected some sort of arson and the newspapers weren’t shy about saying so.”

The community rallied around Crawford and help rebuild the opera house. In the following decade Crawford built a monopoly on the theater industry buying up the Grand, Novelty and Majestic theatres in downtown Topeka.  By 1906 Crawford was a moderately wealthy man when once again the opera house, the crown jewel to his theatre collection, burned down.

At that same time, a new phenomenon that swept across the United States finally came to Topeka in the form of nickelodeons. Deriving their name from the cost of admittance, a nickel, the first forms of movies sprang up and found homes in nearly two-dozen different movie theaters throughout Topeka.

While today many people rent movies or watch television, if one wanted to see a “big-screen” act, then going to one of the many theatres in town was the only choice. With the average movie house holding only 20-30 customers, the ability to support several theatres at the same time was something more manageable then.

In 1926, the Crosby brothers, a family that owned the local department store, decided to get into entertainment as a way to draw customers to their business.

“The Jayhawk Theatre came about as a way to help them continue to be the tops in the department store business at that time,” said Wallace. “They originally spent $250,000 on building the theatre and upon completion, touted it as just as good if not better than pleasure palaces on Broadway.”

Eventually, the advancement of technologies would lead to the advent of the modern movie industry and with it the ascent of the movie theater. In Topeka, the Kaw movie theater, formerly the Fox-Grand became the center of the movie going experience in the 1960s. This lasted until the creation of Fox Whitlakes theaters and then eventually the Westridge Six and Eight theaters and culminating in today’s state-of-the-art Hollywood 14 theaters.

While the masses flocked to the movies, the city still embraced the old theater with the creation of the Topeka Auditorium in 1940. Taking over the space at the corner of Eighth Street and Quincy Street, the building originally started as a Works Progress Administration project during the Great Depression of the 1930s. Completed just before the start of World War II, the building hosted performances that ranged anywhere from Marshall’s Civic Band to Kansas State High School basketball tournaments.

As the decades passed and the building fell into disrepair, the community looked to re-envision what the building could be. In 1987, the auditorium was renamed the Andrew J. and Georgia Neese Gray Topeka Performing Arts Center after a successful capital raising campaign that collected $2.7 million to give the facility a new lease on life.

“Since the building started out in its new role as TPAC, it’s been host to some incredible events that have ranged from comedians like Ron White to some of the best performances in the history of the Topeka Symphony,” said Erin Aldridge, Topeka Performing Arts Center marketing manager.

Looking forward, Aldridge sees the role of TPAC as one of interest in the efforts to bring life back to the downtown area of Topeka.

“We can act as an anchor to this area,” said Aldridge. “We give roughly 2,000 people a reason to come downtown as a community.”