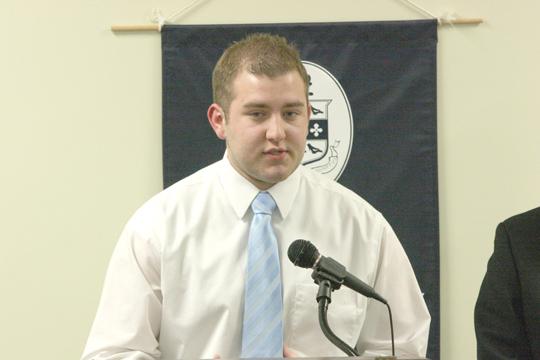 For Nic Campbell, life has at times been all about the journey, literally. Born in Memphis, Tenn., Campbell grew up in a family that saw a lot of stops along the way.

By the time high school ended, Campbell developed his self-professed love of politics and had a desire to study political science somewhere. That’s when Washburn entered the picture for him as he started investigating schools that might interest him.

“At first I was really into political science,” said Campbell. “I’m a huge political nut, I guess you could say and also they have a pretty good pre-law program. I met with [professor Steve Cann], with all the pre-law advisors and I just really like it.”

Beyond the academics, Campbell also immediately found comfort in the atmosphere at Washburn. According to Campbell, that atmosphere consisted of a culture of everyone getting along and being friendly. The opportunity to be able to know a large portion of the campus was also very attractive to him as well.

“You get to know everyone personally instead of on a big campus like where there are 40,000 students,” said Campbell.

Beyond that, Campbell also felt an attraction to the unique situation of Washburn as a campus funded by the community that surrounds it. According to Campbell, the ability of students to go out into the community that supports them is one of the things he finds most inspiring about Washburn.

Aside from all the activities, he invests time on campus, Campbell also finds time to both learn and serve at the same time as an intern for former Washburn Student Government Association president and current state Senator Garrett Love.

In what little free time that he has, Campbell likes to spend it with friends, going to movies and fulfilling a pre-test ritual of going out with friends the night before to IHOP or Steak N’ Shake and enjoying the company of friends. Another of Campbell’s interests falls into what Mark Twain so famously referred to as, “a good walk, spoiled,” otherwise known as the sport of golf.

Beyond all the other things that make him who he is today, Campbell still has goals to achieve. Part of that is running for office as vice-president of WSGA. Among the issues that he would like to tackle, Campbell points to what he terms, “the big issues.”

“I want to start working tuition, food services and start having discussions on those issues,” said Campbell. “Maybe some of those things are long processes that you can’t get accomplished in a year and I’m okay with that but I think we to at least start the conversations and start trying to find solutions so that either we of the next administrations have the resources that can get that done.”

Pointing to WSGA this year as more of a programming-focused administration, Campbell expressed a desire to see a focus on the issues that really matter and engage the faculty and administration on issues that could have a major impact on students.

“We’ve been meeting with the faculty and administration, asking ‘what do you think of these issues?’ and how can we get it accomplished,” said Campbell. “So far we’ve had some positive responses.”